Ajay Devgn And Son Yug's Pic From "The Heart Of Varanasi"

"Yug and I, finding our small moment of peace," wrote Ajay Devgn 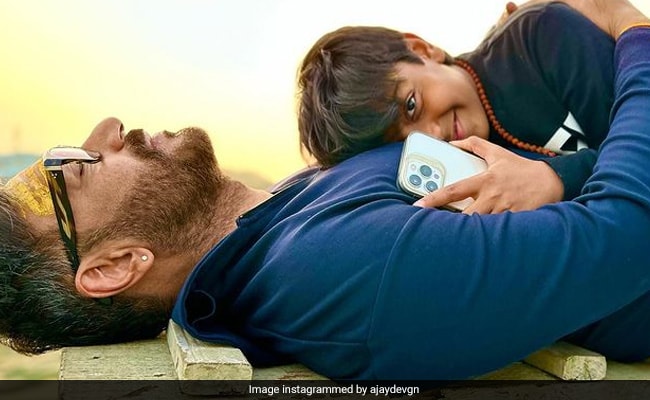 Ajay Devgn never shies away from giving us dad goals. His latest Instagram entry will definitely bring a smile to your face. Courtesy – his adorable moment with Yug. The actor, on Thursday, shared a photo of himself and Yug finding their “small moment of peace” in Varanasi. The snap features Ajay Devgn lying on a boat with Yug resting and smiling at the camera. Sharing the picture, the actor wrote, “Yug and I, finding our small moment of peace in the heart of Varanasi.” His post received a whole lot of love from celebs and fans. Actor Mahesh Shetty dropped red heart icons while a user commented, “Like father like son.” Another comment read, “Father and son, bahut achi jodi (very nice pair).”

Ajay Devgn travelled to Varanasi with Yug and his nephew Daanish Gandhi and going by their recent posts, they are having lots of fun together. Here, the trio are seen smiling with all their hearts on their outing in Banaras. “Ek jagah jab jama ho teeno - Baap, Beta aur Bhanja (when father, son and nephew assemble together at one place),” the actor captioned the post.

Ajay Devgn, last month, visited the Kashi Vishwanath Temple in Varanasi to take blessings after the teaser release of his upcoming film Bholaa. The actor shared a photo of himself from the temple and wrote, “Kaashi Vishwanath ke darshan…Been waiting for this for a very long time! Har Har Mahadev!”

Ajay Devgn was last seen inDrishyam 2, a Hindi remake of Mohanlal's Malayalam hit of the same name. He co-starred with Tabu, Akshaye Khanna, Shriya Saran and Ishita Dutta, among others, in the film. Drishyam 2 has been performing really well at the box office. Next, Ajay Devgn will be seen in Bholaa and Maidaan.