"Just A Girl And Her Birthday Squad": Priyanka Chopra Shares Pics From Mexico Party With Nick Jonas And Malti Marie

"You really know how to love, baby. I'm a lucky girl," Priyanka wrote for Nick 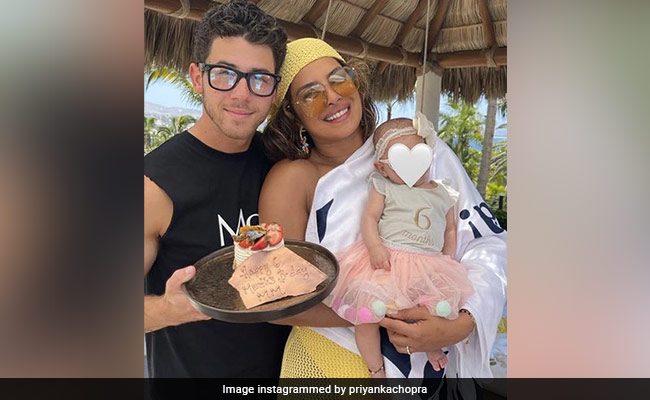 Earlier this week, Priyanka Chopra celebrated her 40th birthday in Mexico with her loved ones. The actress's husband Nick Jonas hosted a beachside bash which was attended by their family and close friends. Priyanka finally posed pictures from celebrations that are all about fun. For various functions, Priyanka wore gorgeous dresses. For the beach, she wore stunning co-ord sets. She called her string of images: "Just a girl and her birthday squad." The actress thanked her birthday gang for flying in from far. "So grateful and thankful to be surrounded by so much love and to be able to spend time with my nearest and dearest. (Even though a lot of them flew in from very far." One of the pictures features a beautiful family portrait of Priyanka with Nick and their baby girl Malti Marie, who is wearing a t-shirt with "6 months" written on it.

Priyanka also thanked Nick for hosting the celebrations and called herself "a lucky girl." "The most incredible celebrations, planned and executed to perfection by my Nick Jonas. Words are not enough to thank you for the most memorable birthday... you really know how to love baby. I'm a lucky girl," she wrote.

She expressed gratitude for the wishes she received from her fans. "I'm so touched by all the birthday love I've received this year. The lovely DMs, surprises, calls, texts, and big hugs made the day even brighter and made me feel truly special. Thank you everyone who reached out, it means the world. Here's to the beginning of the rest of my life. Grateful and blessed," she wrote.

On her birthday, July 18, Nick Jonas shared beautiful glimpses of the party and captioned the post: "Happiest birthday to my [red heart emoji] the jewel of July. So honored to be on this crazy ride called life with you. I love you."

Priyanka Chopra will star in the Hollywood film, It's All Coming Back To Me with Sam Heughan and Celine Dion. She will also feature in the Russo brothers' series, Citadel.