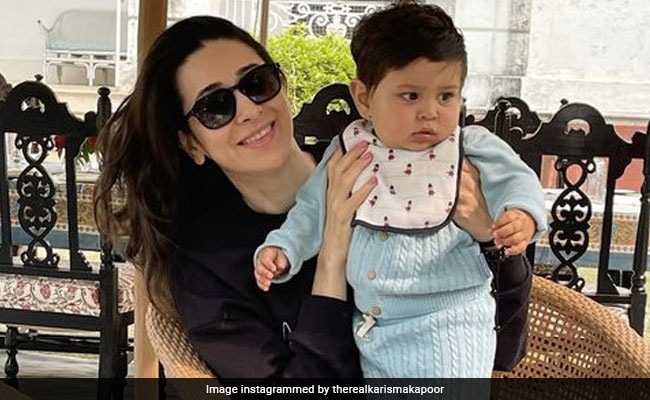 Kareena Kapoor and Saif Ali Khan's son Jeh Ali Khan is celebrating his first birthday with heartfelt wishes flowing in from all quarters. Among those who are showering the little one with blessings and love are his aunts Karisma Kapoor, Soha Ali Khan and Saba Pataudi. Kareena Kapoor's sister and actress Karisma Kapoor shared a special picture in which she is seen holding the little one, who looks rather perplexed, dressed in a pyjama set. In the caption, she wrote, “Happy 1st birthday to J baba. Love you mostest, our bundle of joy,” along with the hashtags “baby J”, “happy birthday” and “family first”.

Saif Ali Khan's sister Soha Ali Khan too wished the little one on the occasion. The actress shared a video of Jeh jumping around on his knee before stopping to stare at the camera. In the caption, she wrote, “What? It's my first birthday. Happy birthday Jeh baba.”

Saba Pataudi, Saif Ali Khan's sister, too shared an adorable photo of Jeh. Also in the post is a throwback image of Saif Ali Khan as a toddler and the similarities between the father and son are unmissable. In the caption, she wrote, “MY JEH Jaan....turns 1. I luv you... God bless. Does he look like his Abba?”

Fans flocked to the comment section to wish the little one and take a look at Saif Ali Khan's childhood picture.

Kareena Kapoor and Saif Ali Khan have worked together in films such as Omkara, Agent Vinod and Kurbaan. Their relationship that began on the sets of Tashan culminated in marriage in 2012. They welcomed their son Taimur Ali Khan in 2016 and Jeh in 2021.