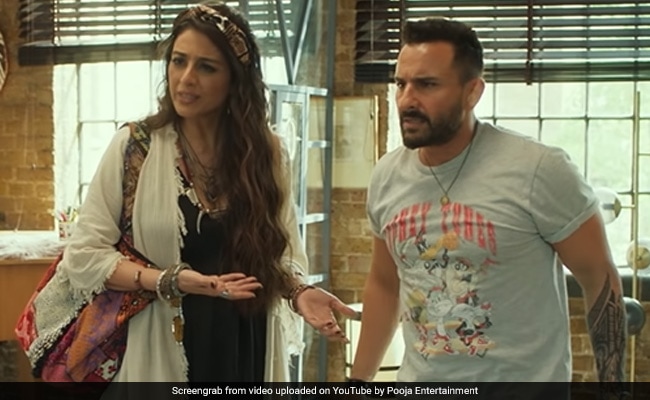 Saif and Tabu in a still from Jawaani Jaaneman trailer. (Image courtesy: YouTube)

The trailer of Saif Ali Khan and Tabu's forthcoming film Jawaani Jaaneman is out now and we bet Saif and Tabu's intriguing characters will make you play the trailer on loop. The film also features Alaya Furniturewalla in the lead role. She plays Tabu and Saif's teenaged daughter. That's not it, if you have missed watching Farida Jalal onscreen, Jawaani Jaaneman is a bonus for you. The trailer begins with Farida Jalal asking her son (Saif Ali Khan) if he is gay as he refuses to get married. The family shot is followed by glimpses of Saif Ali Khan's casanova lifestyle, in which he can be seen flirting and partying with girls in bars and clubs. His life turns upside down when his teenaged daughter (Alaya), whom he has never seen before, turns up at his doorstep and reveals that she is pregnant.

The trailer becomes more interesting when Tabu enters as Alaya's hippie mother. What follows next are the hilarious moments between Saif, Tabu and Alaya. Sharing the trailer on social media, Alaya Furniturewalla wrote: "One brings the charm. The other adds the spice. And he brings the party. Let's rock n roll with Jawaani Jaaneman trailer."

Directed by Nitin Kakkar, Jawaani Jaaneman also features Kubbra Sait, Kumud Mishra and Rameet Sandhu in pivotal roles. The film marks the Bollywood debut of Alaya, who is the daughter of actress Pooja Bedi. The film, which has been co-produced by Jackky Bhagnani's Pooja Entertainment, Saif's Black Knight Films and Jay Shewakramani's Northern Lights Films, is slated to open in theatres on February 7.