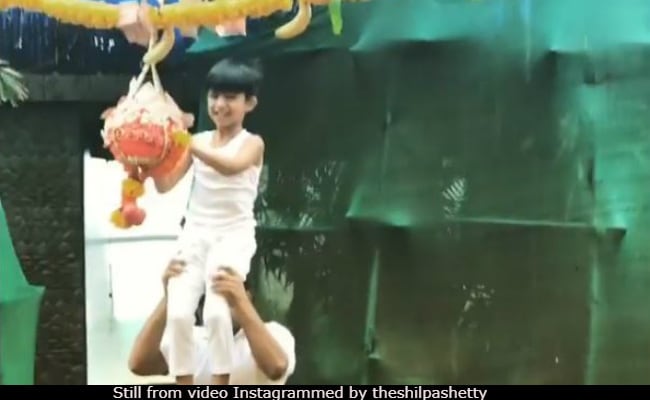 Shilpa Shetty's Janmashtami celebrations with son Viaan look super-duper fun! On Monday morning, Shilpa shared a video on her Instagram from her Janmashtami festivities, in which Viaan can be seen trying to break a dahi handi. Viaan, who made his debut at breaking dahi handi this year as part of Janmashtami celebrations, can be seen succeeding after multiple attempts. In the video, Viaan is lifted up as he can be seen striking the handi multiple times while Shilpa Shetty cheers for him from behind the camera. While the video is cute enough itself, Viaan's adorable smile after he succeeds, clearly takes the cake.

"Jai Kanhaiya Lal Ki! My little Kanhaiya our son Viaan Raj trying his hand at breaking the dahi handi for the first time. Happy Janmashtami to all my Insta family," Shilpa Shetty wrote on Instagram. Shared on Monday afternoon, her post has been viewed over 256,266 times with comments like: "Wow, so cute!" flooding her feed.

Jai Kanhaiya Lal ki My little #kanhaiya our son #viaanraj trying his hand at breaking the #dahihandi for the first time . #happyjanmashtami to all my #instafamily #littlejoys #celebration #gratitude #festivals #teachthemyoung #trytryagain

Viaan is clearly Shilpa Shetty's favourite subject when it comes to making Instagram posts. Viaan celebrated his sixth birthday in May this year with a blockbuster party, which was attended by the likes of Aishwarya Rai Bachchan, who came with her daughter Aaradhya and Sanjay Dutt's twins Shahraan and Iqra. On Viaan's birthday, Shilpa and Viaan went to an old age home to host a dinner, which she said was a family tradition. Shilpa shared a video on Instagram, in which she, Viaan and Sunanda Shetty can be seen distributing fruits to the elderly.

Keeping up with tradition of dinner at the #littlesistersofthepoor ,an old age home . They have very few visitors and the joy on their faces when someone comes and visits them is priceless.Nothing more powerful than to start my sons birthday with Blessings..Thankyou for all your blessings and wishes as well instafam Loads of #gratitude #happiness #blessings #love #unconditionallove

On the work front, Shilpa Shetty recently made an appearance on Salman Khan's reality show 10 Ka Dum. 2007's Apne was her last Bollywood film after which she made special appearances in songs in movies like Dostana and Dishkiyaoon.