Janhvi Kapoor, Dressed As A Bride For Virtual Fashion Show, Can "Hear The Shehnai Playing"

Janhvi Kapoor shared a bunch of new photos from Manish Malhotra's show: "Can you hear the shehnai playing or is it just me?" 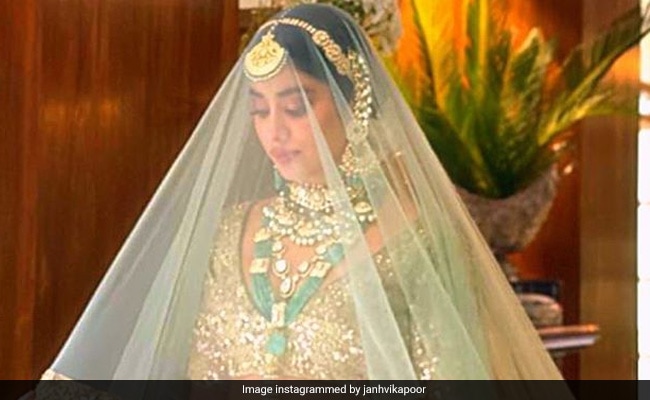 Actress Janhvi Kapoor was the virtual showstopper for Manish Malhotra's new couture and she pulled off the bridal look just right. Somewhere between dressing up as a bride and her photoshoot, Janhvi really enjoyed new bride vibes, which reflect in her Instagram posts. Sharing a bunch of photos from Manish Malhotra's collection launch, Janhvi wrote: "Can you hear the shehnai playing or is it just me?" While Janhvi was in New Delhi for the photoshoot in Manish Malhotra couture, the fashion event was a virtual one, keeping social distancing norms in mind. Janhvi was stunning in a gorgeous piece from the designer's new Ruhaaniyat collection. Manish Malhotra was one of Sridevi's closest friends.

Here are glimpses of Janhvi's bride vibes. "So happy I got to be a part of Manish Malhotra's exquisite new collection," she wrote.

Can you hear the शहनाई playing or is it just me ???? So happy I got to be a part of @manishmalhotra05 's exquisite new collection ❤️ @fdciofficial

Meanwhile, Janhvi Kapoor has been busy exploring her creative side in the past few months. Janhvi, who loves painting, shared glimpses of her art sessions on Instagram and wrote: "Been trying to be a painter this past week."

Janhvi also often trends for her quarantine diaries featuring sister Khushi. "How to annoy your sister 101," she captioned one of her posts.

How to annoy your sister 101 #quarantineedition ????‍♀️

When it comes to movies, Janhvi Kapoor was last seen in Gunjan Saxena: The Kargil Girl, a biopic of Indian Air Force officer Gunjan Saxena, who one of the first two woman combat aviators to be commissioned into the war zone during the Kargil War. Her upcoming movies include horror comedy Roohi Afzana, in which she co-stars with Rajkummar Rao, and rom-com Dostana 2, which also stars Kartik Aaryan.