On A Scale Of 0 To Shanti Priya, How Well Did Janhvi Kapoor Recreate This Om Shanti Om Scene?

So, how did Janhvi Kapoor do? 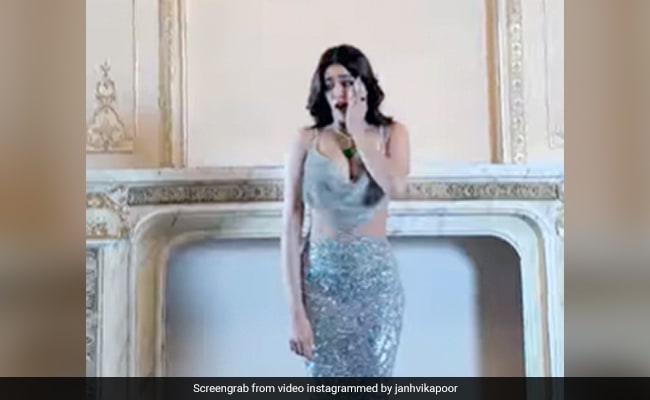 Trust Janhvi Kapoor to light up your day with her entertaining and hilarious reels. The actress, who recently starred in the film Mili, often treats her fans to engaging videos of herself trying viral Instagram trends. Her latest post is a similar one. Janhvi, on Friday, posted a Reels featuring herself and Shanti. No, not Deepika Padukone from Om Shanti Om. “Yeh Shanti kuch alag hai (this Shanti is different)”. In the video, Janhvi is lip-synching a dialogue, “Issi jhoomar ke niche, issi jhoomar ke niche milegi Shanti ki laash.” FYI: it is a fun version of Deepika Padukone's dialogue from her debut film with Shah Rukh Khan. The camera then pans towards the ground and shows celebrated photographer Vaishnav Praveen lying on the floor, right below a chandelier, with his eyes closed. As soon as the lens zooms in, he bursts into laughter. “Yeh Shanti kuch alag lag rahi hain (this Shanti looks a bit different),” read Janhvi's ROFL caption.

Janhvi Kapoor, after sharing the clip, posted a heartwarming birthday wish for her dad, filmmaker Boney Kapoor. She worked with him for the first time in Mili. The actress picked a funny clip of her father to prove that he is “the cutest in the whole world.” She wrote, “Happy birthday to the cutest Papa in the whole world. I love you more than you can ever imagine. You're the strongest man I know and I'm the luckiest girl because I get to call you my dad. Love you papa.” Aww. Daughter goals, right?

In terms of work, Janhvi Kapoor was last seen in Mili. She shared screen space with Sunny Kaushal and Manoj Pahwa in the film. Mili, directed by Mathukutty Xavier, is a Hindi remake of his 2019 Malayalam thriller Helen. The film shows the struggle of the staff of an eatery, who gets trapped inside the refrigerator of the food outlet.

Janhvi Kapoor also has Bawaal with Varun Dhawan and Mr and Mrs Mahi with Rajkummar Rao in the lineup.