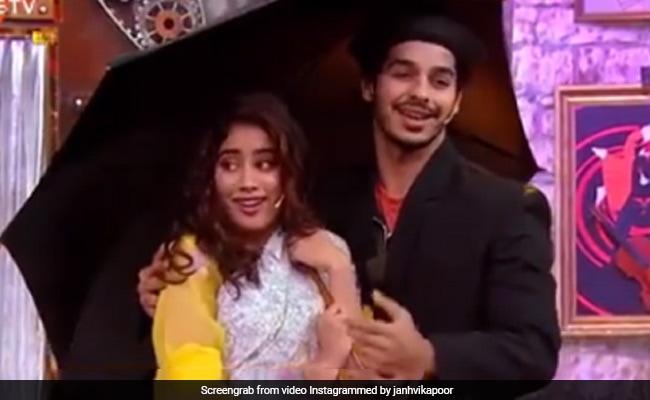 Janhvi Kapoor and Ishaan Khatter in a still from the video. (Image courtesy: janhvikapoor)

Sharing the video on her Instagram profile, Janhvi Kapoor wrote: "Watch me travel back to time with Ishaan Khatter only on Movie Masti With Maniesh Paul. The video has over 5 lakh likes on Instagram and it is going insanely viral on social media. Check out the video here:

Janhvi Kapoor and Ishaan Khatter co-starred in Shashank Khaitan's 2018 film Dhadak, which was a Hindi remake of the Marathi film Sairat. They frequently make appearances on each other's social media profiles. Take a look at some of the posts here:

Y u photobomb?? Was going for a nice picture of open sky.

On the work front, Janhvi Kapoor will next be seen in Karan Johar's period drama Takht. She will also be seen in the horror-comedy Rooh Afza, co-starring Rajkummar Rao and Varun Sharma. She also has Gunjan Saxena - The Kargil Girl and Dostana 2 in the pipeline.

Ishaan Khatter's last release was Dhadak. He made his acting debut with Majid Majidi's Beyond the Clouds. He will next be seen in Mira Nair's adaptation of the Vikram Seth classic novel A Suitable Boy. He will also be seen in Khaali Peeli, co-starring Ananya Panday.