Janhvi Kapoor Commented On Arjun's Selfie With Anshula. Then, Anand Ahuja Joined In 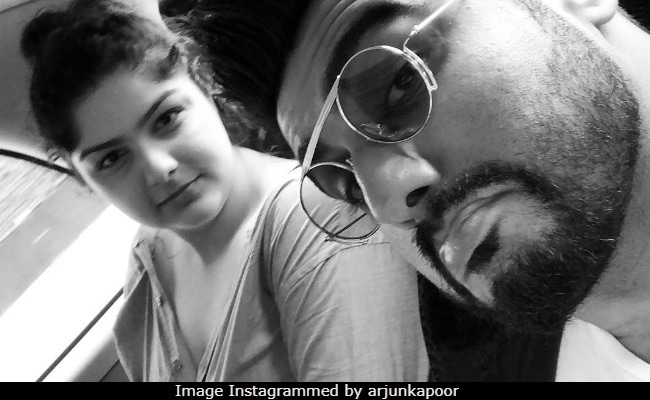 New Delhi: Looks like Arjun Kapoor's work-and-play trip to London is about to be wrapped. The 32-year-old actor was chilling with his veeres - Sonam Kapoor, Kareena Kapoor, Rhea Kapoor and Anand Ahuja in the British capital, where Sonam celebrated her 33rd birthday recently. Arjun recently rounded off his trip with a selfie with sister Anshula from inside a car and captioned it "I think life's just better in black and white!" Janhvi Kapoor, who is back home in Mumbai and busy with her film promotions, added a point of her own. "And when you're on your way to get some nalli nihari," she wrote. Anand Ahuja also had something to say: "The take-over," he wrote.

Apart from chilling, Arjun was also filming Namaste England in London with Parineeti Chopra and this is how she announced the wrap of the film's London schedule. "Love and laughter in this work-cum-holiday trip in sunny London! It's been amazing guys. Now time for the next one... over and out," wrote Parineeti.

Love and laughter in this work-cum-holiday trip in sunny London!! its been amazing guys. Now time for the next one.. over and out! #namasteengland 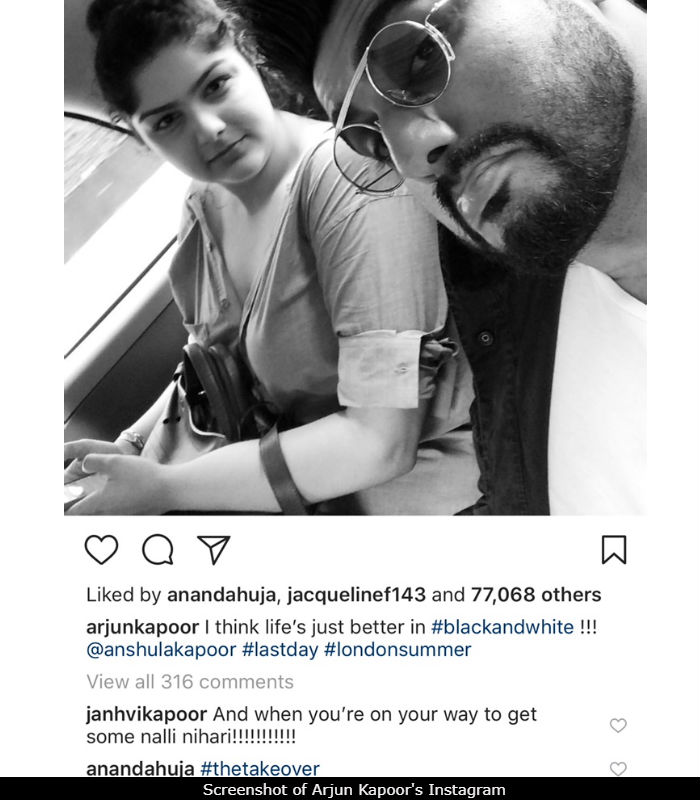 When in London, Arjun missed being by Janhvi's side on her big day. The trailer of her Bollywood debut Dhadak released on Monday, ahead of which Janhvi was showered with good wishes and blessings, courtesy of her big brother. |Firstly, sorry I'm not there in Mumbai but I'm by your side, don't worry," read an excerpt from Arjun's post, which also added: "All the best for Dhadak! I'm certain my friends Shashank Khaitan and Karan Johar have presented you and Ishaan as the modern Romeo and Juliet with elan!" Janhvi co-stars with Ishaan Khatter in Dhadak.

Tomorrow you will be part of the audience forever @janhvikapoor cause your trailer comes out... Firstly, sorry I'm not there in mumbai but I'm by your side, don't worry. I just wanted you to know this profession is amazing if you work hard, be honest, learn to take the accolades with the brickbats, respect opinions, yet follow ur own path & instinct. It's not gonna be easy but I know your are ready for all the madness that will ensue. All the best for #dhadak! I'm certain my friends @shashankkhaitan & @karanjohar have presented you & @ishaan95 as the modern Romeo & Juliet with elan !!!

Promoted
Listen to the latest songs, only on JioSaavn.com
Meanwhile, this is what Anshula had to say about the trailer of Dhadak, which is now crazy viral:

Aaaaaaah My cutie @janhvikapoor's trailer is out now for the world to see and I cannot be more proud, or more excited! My mind has officially been blown by both my Jaanu & @ishaan95! How phenomenal is the trailer and how fantastic are both of them?? Hit it out of the park and how! 20th July, why you so far away? Super duper excited for this one!! (link in my bio)

Arjun and Anshula are Boney Kapoor's children with first wife Mona, who died in 2012. Sridevi, who died this February, was Mr Kapoor's second wife and Janhvi is the eldest of their two daughters. Directed by Shashank Khaitan, Dhadak is a remake of Marathi blockbuster Sairat and is set to hit screens on July 20.