It's Not Just Malaika Arora In Her Throwback Pic. Look Closely 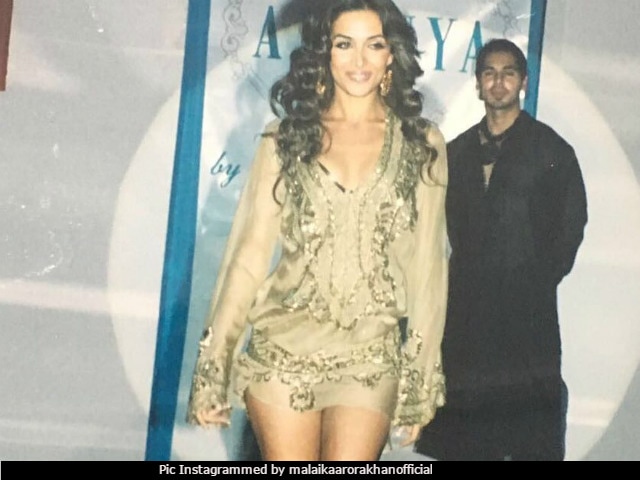 New Delhi: The Throwback Thursday is here and so is an Instagram post from Malaika Arora Khan. The blast from the past is delightful in more than one ways and you will soon figure out how. Apart from her acting projects, Malaika also has designations like model, dancer and show host on her resume. This Thursday called for a stunning memory of hers as a model deep down from the labyrinths of her archives. She Instagrammed a photograph of herself on the ramp in a spotlight-stealing beige ensemble from the studios of designer Nandita Mahtani. While you may be occupied admiring Malaika knowing the stunner she is, please move your eyes around the rest of the frame. Yes, that's Dino Morea in the background.

The picture arrived with a hilarious caption: "Omg! Major major major throwback. When I walked for Nandita Mahtani eons back. But can't decide if Dino Morea forgot his cue, trying to remember his cue or jus staring."

Omg!!!!!!#majormajormajorthrow....when I walked for @nanditamahtani eons back.but cant decide if @thedinomorea forgot his cue,trying to remember his cue or jus staring

A post shared by Malaika Arora Khan (@malaikaarorakhanofficial) on Sep 7, 2017 at 1:00am PDT

Dino Morea was quite popular as a supermodel in the Nineties. Did we say Dino Morea? Looks like Dino too is a fan of throwbacks. This is just after he had won the Gladrags Manhunt pageant. "Found this one of myself, when I had just won the #gladrags manhunt. Always a poser," he wrote.

#flashbackfriday found this one of myself, when I had just won the #gladrags manhunt. Always a #poser #dinomoreafitness

Promoted
Listen to the latest songs, only on JioSaavn.com
We have also curated few more pieces of throwback gold from Malaika's Instagram - like the one she shared with her colleagues from MTV and also one with son Arhaan, from when he was a baby. Malaika was married to actor producer Arbaaz Khan - the duo divorced in 2016 and Arhaan is now 15.

Malaika Arora has starred in films like Housefull and Kaante but is best known for her dance numbers like Chaiyya Chaiyya from Dil Se and Munni Badnaam Hui from Dabangg. She's also appeared on television shows like Nach Baliye and Jhalak Dikhhla Jaa as judge.