It's Alia Bhatt And Ranbir Kapoor's Day. A Look At Their Relationship Timeline 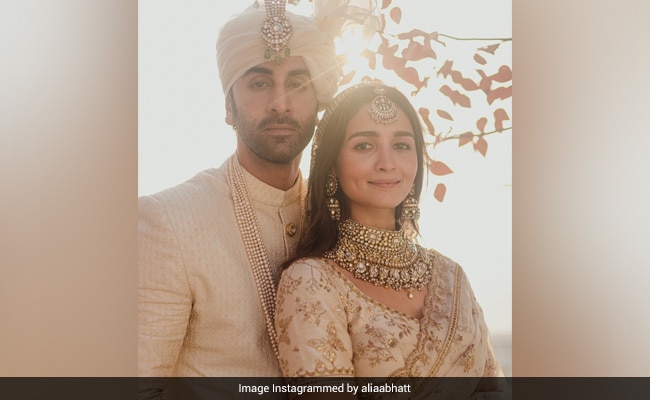 It is indeed a happy Sunday for Alia Bhatt and Ranbir Kapoor. After all, the couple have welcomed their “magical girl” into this world. The fantastic update was shared on Alia's Instagram page. Here, we have a postcard with a sketch of a lion family. The note attached to it read, “And, in the best news of our lives: Our baby is here...And, what a magical girl she is...We are officially bursting with love - blessed and obsessed parents!!! Love...love...love Alia and Ranbir.” The couple arrived at the HN Reliance Foundation Hospital in Mumbai at 7 am today. They were later joined by Soni Razdan and Neetu Kapoor. Warmest greetings are pouring in from all corners for the new parents in town.

Alia Bhatt and Ranbir Kapoor announced the news of their pregnancy in June. The couple got married in an intimate ceremony on April 14, this year.  So, on this super amazing day, we have decided to look at Alia and Ranbir's relationship timeline. So, are you ready? Read on.

No, it wasn't the sets of Brahmastra. Alia Bhatt confirmed on the first episode of Koffee With Karan 7 that they exchanged notes on a Tel Aviv flight. "When I was single after a very long time, everyone around me, my sis and friends said you and he (Ranbir) are going to be together. We talked about it on our flight. We were seated together and then something went wrong with his seat. Later his seat got fixed and when we exchanged notes. The vibe started there only and the rest is history,” she said.

2. The First Appearance Together

3. I Love You to Ranbir Kapoor

Alia Bhatt painted our screens red when she said “I love you” to Ranbir Kapoor at the 64th Filmfare Awards.

Alia Bhatt- I love you (from stage) after winning award, while Ranbir Kapoor is all smiles❤????#FilmfareAwards2019pic.twitter.com/UPHZFzvV5L

4. A Vacation With “best boys”

Ranbir Kapoor, during an interview with film critic Rajeev Masand, opened up about his wedding plans with his “girlfriend' Alia Bhatt.  "It would have already been sealed if the pandemic hadn't hit our lives. But I don't want to jinx it by saying anything. I want to tick mark that goal soon in my life."

6. Alia Bhatt Wanted To Marry Ranbir Kapoor Since She Saw Him Onscreen

Alia Bhatt, on various occasions, has confessed her feelings for Ranbir Kapoor and how she wanted to marry him since childhood.  During an interview with India Today, Alia said: “When I saw him for the first time on screen, that was the day I decided that I wanted to marry him. That was when I was a sweet little girl. But that's what I meant and I feel it's a state of mind.”

Alia Bhatt opened up about Ranbir Kapoor's proposal on Koffee With Karan 7.  "In terms of planning, he totally blew my mind, we were not even talking about it. After the pandemics, we decided will just go with the feeling. He just carried the ring and did it in the middle of the jungle. In the middle of the jungle." Alia added, And after it was over, he had planted the guide to take our pics. He knows how much pics mean to me. It was too special," she said.

Alia Bhatt and Ranbir Kapoor got married after 5 years of dating. The two tied the nuptial knot in their “favourite spot - the balcony”. Her note read, “Today, surrounded by our family and friends, at home … in our favourite spot - the balcony we've spent the last 5 years of our relationship - we got married. With so much already behind us, we can't wait to build more memories together … memories that are full of love, laughter, comfortable silences, movie nights, silly fights, wine delights and Chinese bites. Thank you for all the love and light during this very momentous time in our lives. It has made this moment all the more special.”

When Alia Bhatt returned to Mumbai after completing her shooting schedule for the Hollywood film House Of Stones, Ranbir Kapoor made it a point to make her wife feel extra special. The actor was waiting inside the car for Alia and she jumped into his arms.

Alia Bhatt wished the love of her life in the sweetest way possible on his 40th birthday. Take a look:

When Ranbir Kapoor came to the sets of Alia Bhatt's debut project Student Of Year and jokingly asked Karan Johar, "Should I marry her?" FYI: Alia Bhatt had no idea until Ranveer Singh and Karan Johar talked about it KWK.