Shared on Sunday evening, Ishaan's photo of Misha garnered comments such as: "adorable", "so cute" and "aww", basically all things nice. 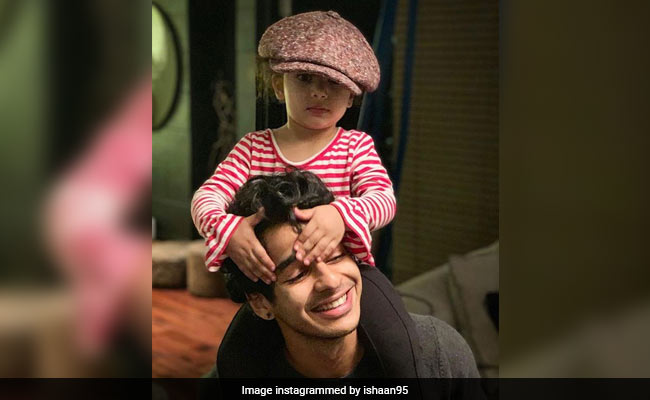 Shahid Kapoor's brother Ishaan Khatter shared a cuteness overloaded photo on Instagram, with the cuteness quotient being added by none other than his two-year-old niece (Shahid and Mira Rajput's daughter) Misha Kapoor. On Instagram, Ishaan Khatter captioned the photo as: "Sass = 100 per cent," and we'll just tell you why. In the photo, Misha can adorably be seen piggybacking of sorts on mamu Ishaan, who is more than happy to be part of Misha's mischievous antics. While Ishaan can be seen smiling ear-to-ear, Misha in turn, who clearly wears an oversized cap, sports a serious expression on her face. Shared on Sunday evening, Ishaan's photo garnered comments such as: "adorable", "so cute" and "aww", basically all things nice.

However, this is not the first time that Ishaan picked out an adorable photo of niece Misha. Earlier, he shared a cuteness overloaded click, featuring the little Kapoor and himself in an adventurous mood and captioned it: "Guchki baby."

Ahead of that, sharing a photo of little Misha treating him to a piece of mithai, Ishaan Khatter had said: "Best bites ever."

Shahid Kapoor and Mira Rajput married in July 2015 and Misha, their first child, was born the following year. Shahid and Mira welcomed their second child, a son they've named Zain, in September this year.

Ishaan Khatter made his acting debut in a full-fledged role with Majid Majidi's Beyond the Clouds and Dhadak, with Janhvi Kapoor, marked his Bollywood debut.