Hey Katrina Kaif, Sister Isabelle Has Always "Got Your Back." See Her Birthday Post

Isabelle, Katrina's youngest sister among the six siblings, has shared a photo on her Instagram page where she is seen with Katrina 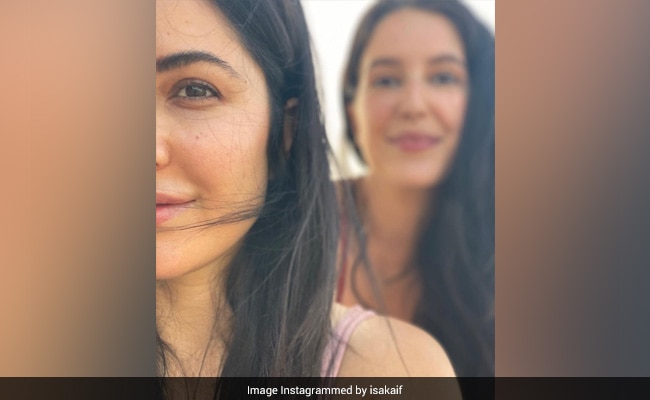 First, Happy Birthday Katrina Kaif. The actress turns 38 today, without looking a day older. But, what says her sister Isabelle Kaif? Isabelle, Katrina's youngest sister among the six siblings, has shared a photo on her Instagram page where she is seen with Katrina. We see Katrina's half-face in the foreground while Isabelle stays a bit blurred in the background. The sisters smile at the camera while a breeze plays with their hair. The photo is symbolic and Isabelle explained it in her caption, "Got your back. Happiest of Birthdays Katrina Kaif. Always."

Isabelle, who has entered the Bollywood industry very recently, loves to spend time with her sister and her Instagram posts are proof. The siblings were seen together on New Year's Day. In the photos that Isabelle shared, the two are sitting on a lawn and laughing with each other while the new year begins.

Isabelle also visits Katrina on her film sets and keeps us posted with photos. In a recent one, she is seen in a casual look. In the caption, she wrote a "self-note" in the caption, which has brought a smile to our faces, "Note to self: always wear makeup when visiting your sister on set. Impromptu photoshoots may occur."

Isabelle has never kept it a secret that Katrina is one of the most influential people in her life. Katrina's Bollywood leap inspired Isabelle to get trained in acting, dancing as well as directing. She finally made her Bollywood debut this year with Time to Dance, opposite Sooraj Pancholi. Isabelle played the role of a ballroom dancer in the film. She shared clips from the movie on her page. Before splashing the teasers and trailers, she wrote in a post, "Follow the moves, follow your heart. Time To Dance teaser out tomorrow."

She is also part of Karan Lalit Butani's Kwatha, opposite Aayush Sharma. The shooting has begun. The film is named after a village in Manipur and the story revolves around an army officer.