"I get hurt easy and then I throw a tantrum and then I realise that Baba's fans are full of kindness," wrote Babil 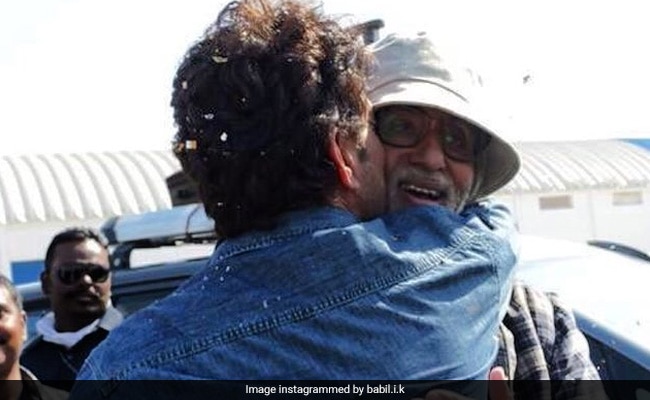 A file photo of Irrfan with Amitabh Bachchan. (courtesy babil.i.k)

Late actor Irrfan Khan's son Babil wishes to work with Amitabh Bachchan one day. Babil, who will soon make his acting debut with the Anushka Sharma produced Qala, posted a throwback picture of his father and his Piku co-star Amitabh Bachchan and he wrote in his caption: "I get hurt easy and then I throw a tantrum and then I realise that Baba's fans are full of kindness and warmth so let's ignore the hate. One day, when I'm capable, through infinite patience and hard work, I will make Baba's fans proud. I love you. And one day to work with you sir Amitabh Bachchan."

This is what Babil shared:

Babil's post arrived a day after he revealed why he stopped sharing pictures of his late father on social media. He revealed that some people on the Internet accused him of "using" his father "to promote" himself. Babil clarified that he was only sharing memories of his father to "fill up the void that he left in his fans."

Irrfan Khan died at a Mumbai hospital in April last year, where he was being treated for a colon infection. In 2018, the actor had revealed that he was diagnosed with neuroendocrine tumour diagnosis. The actor is survived by his wife Sutapa and sons Babil and Ayan.

Irrfan Khan leaves behind a legacy of great films like Maqbool, Haasil, Paan Singh Tomar, Haider, Piku, Talvar and Qissa. He was also a part of international projects like The Namesake, Life Of Pi, Inferno, Slumdog Millionaire and The Warrior, among others.

Meet Malaika Arora's "Forever Companion" And No, It's Not Arjun Kapoor. See Pic Inside