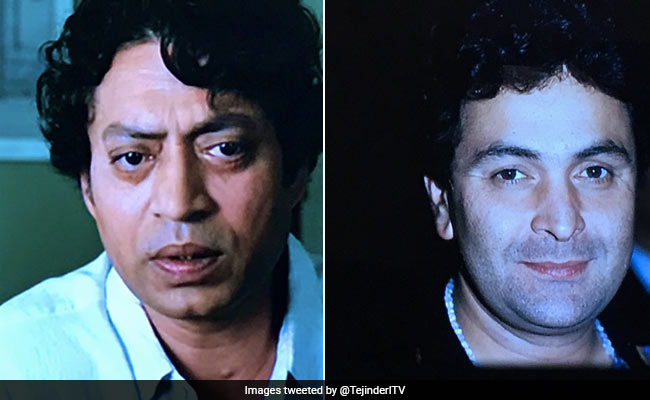 Late actors Rishi Kapoor and Irrfan Khan were posthumously honoured at Sunday's BAFTA Awards. The In Memoriam segment of the BAFTA Awards began with a tribute to Prince Philip, Duke of Edinburgh, who died on April 9 and went on to include the legendary Bollywood stars. BAFTA also remembered Hollywood stars such as Chadwick Boseman, Sean Connery, Kirk Douglas, Ian Holm, Barbara Windsor, George Segal, Christopher Plummer, among others, who the cinema world lost in the recent past. The morning after the BAFTA Awards, Twitter was flooded with emotional over BAFTA's tribute to Irrfan Khan and Rishi Kapoor. "BAFTAs recognize talents," read a tweet while another added: "Proud moment for India."

In April last year, Rishi Kapoor died at the age of 67 after battling cancer for a few years. Just the day earlier, the world of cinema lost Irrfan Khan after a hard-fought battle with cancer. Actor Chadwick Boseman, who was best known as the titular Black Panther in the Marvel superhero movie, too had cancer and died in August. He was just 43. He posthumously won the Best Actor Golden Globe this year for Ma Rainey's Black Bottom.

Here are some of the tweets, which remembered Rishi Kapoor and Irrfan Khan in cherished thoughts:

#IrrfanKhan & #RishiKapoor among the #BAFTA "In Memoriam" tributes - their work appreciated from Indian film screens to a much wider 🎥 audience #BAFTAs#filmpic.twitter.com/lFup2QBmWD

What a proud moment for Bollywood !🥰#BAFTA pays Tribute to the Late Actors #RishiKapoor and #IrrfanKhan in their 'In Memorium' segment.#BAFTAs#BritishAcademyFilmAwards#BAFTA2021#Baftas2021#BAFTAAwards2021#SiddharthKannan#SidKpic.twitter.com/NVgw0Rgx6j

#EEBAFTAs
Remembering #IrrfanKhan just makes me Miss him even more. What A lagend 😔 one of The Best actor in my mind 🙌🏻

We missing You Irrfan ❤️😔#RishiKapoorpic.twitter.com/xNdwijKXjp

#Bolllywood actors #RishiKapoor and #IrrfanKhan were among late screen icons who were given tributes at the 74th British Academy for Film and Television Arts (BAFTA) awards.#BaftaAwards2021#BAFTA2021pic.twitter.com/W8qsD0S309

Irrfan Khan, who also featured in a number of Hollywood movies, also found a mention in the winning speech of actor Riz Ahmed at the Gotham Awards held in New York earlier this year. He quoted a lesson from Irrfan Khan to son Babil: "Surrender to the dance of uncertainty." Back home, at the recently held Filmfare Awards, Irrfan Khan was posthumously honoured with the Best Actor Award for his performance in Angrezi Medium. Meanwhile, Rishi Kapoor's role in the Hindi remake of Hollywood hit The Intern will now be played by Amitabh Bachchan.