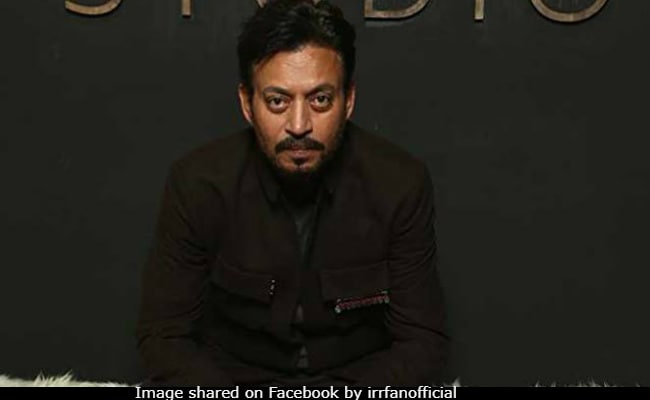 Irrfan Khan is currently in London for treatment (courtesy irrfanofficial)

Those who were hoping to see Irrfan Khan in an Amazon web series, you may want to sit down. The 51-year-old actor, who is currently battling a rare form of cancer, has opted out of Amazon's upcoming web series Gormint, which is being made in collaboration with comedy conglomerate AIB, as per an update posted on his Facebook account. Irrfan wrote that he had to exit the project after working on it for months because of his current medical condition: "Ministry, now known as Gormint, the Amazon Video series I have been working on with the team at AIB, was one of my most favourite ongoing projects. After shooting for months and after having a ballistic time on set, I discovered my now on-going physical condition."

"With a heavy heart I would like to say that due to this ongoing situation, I will not be able to fulfil my acting commitment to the show," Irrfan added in his post. Irrfan Khan was cast as the lead actor in AIB's political satire Gormint, which was expected to release worldwide in January next year.

In his note, Irrfan added that his team and AIB tried to figure out a way about completing the project but his current medical condition does not allow him to go on with the show: "I am gutted by this development because the character and the show thrilled me, and I even lived with the character for several months before having to cut the journey short. But after extensive discussions, workarounds and sincere efforts by everyone involved, the situation prevents me from being able to do the show entirely. And thus I must, at this time, exit stage left."

Gursimran Khamba and Tanmay Bhat, co-founders of AIB, bid an emotional farewell to Irrfan Khan upon his exit from the show with a note shared on their Instagram accounts:

To everyone who's been asking me "What's happening with The Ministry? (now Gormint) I'd like to inform everyone that due to Irrfan sirs unfortunate health situation we've jointly decided that he no longer be cast in the show. Over the last year as we worked on the show he's been everything from a friend, teacher to a mentor and I feel privileged to have had the opportunity to collaborate with him. Life mein aise mauke kam hi milte hain - but abhi jo bhi likhoonga cliche lagega - toh woh saari stories baad mein. For now from me and all of us at AIB, all we want is for him to get healthy and healed so we can plan more shenanigans together in the future. I still look forward to excitable 3 am calls from him with terrific random ideas for the show. And with a heavy heart, as we all begin to imagine and work on the show without him, I can only hope that we will still make something worthy of the vision and passion sir showed for it. Get well and be better soon! Abhi bahut designs ke kurte try karne hain! :)

Meanwhile, Irrfan Khan, "actor extraordinaire", will really be missed, said Vijay Subramaniam, Director and Head of Content, Amazon Prime Video India, in a statement, reported news agency IANS: "Amazon Prime Video, along with the show's creators and cast, are deeply saddened by this news. Irrfan has been - and will continue to remain a part of the Amazon family. We wish him a speedy and successful recovery and look forward to watching the show with him sitting right next to us."

Irrfan Khan is currently in London undergoing treatment for neuroendocrine tumour. At the beginning of this month, in an interview to Hindustan Times, Irrfan Khan revealed he underwent the fourth cycle of chemotherapy and is awaiting two more. The actor also revealed that he received positive feedback after the third round of chemotherapy. In a statement on March 16, Irrfan Khan announced that he's been diagnosed with a rare form of cancer, after which he resurfaced on social media either to share health updates or promote Karwaan, which released earlier this month. He also changed his display picture on his social media accounts a few times since he opened up about being diagnosed with neuroendocrine tumour:

Another Irrfan Khan project, which has been affected by the actor's medical condition, is Honey Trehan's film, also starring Deepika Padukone. Co-produced by Vishal Bhardwaj, the film has been delayed indefinitely and will only go on floors after the actor's eagerly-awaited recovery. Irrfan Khan was also absent from the promotions of Karwaan, his second release after he flew to London for treatment. Irrfan Khan's film with Oscar-nominated filmmaker Marc Turtletaub Puzzle recently released overseas and is yet to hit screens in India.