Into The Blue: Farhan Akhtar's Scuba Diving Video From Maldives 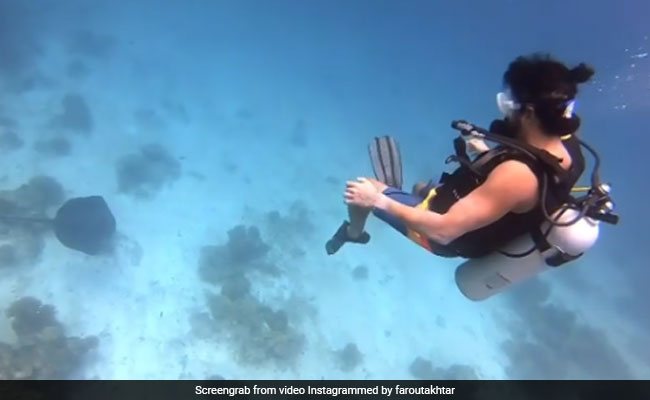 Farhan Akhtar in a still from the video. (courtesy faroutakhtar)

Farhan Akhtar shared a video from a scuba diving session from Maldives and it just gave us major Zindagi Na Milegi Dobara feels. The actor didn't reveal if the video is a throwback or a relatively recent post but we simply love it. The actor added soothing music to the video and he wrote in his caption: "Feed your soul." Farhan Akhtar added the hashtags #scuba, #ray, #maldives and #faroutdoors to his post. The comments section of his post was filled up with heart emojis from his Instafam. "Wow," commented a fan. "OMG this is beautiful," added another one.

Farhan Akhtar frequently shares posts from different facets of his life on social media. On his sister and filmmaker Zoya Akhtar's birthday, he shared a childhood memory and wrote: "Happy birthday to someone who I know is always watching over me. Love you Zoya Akhtar... Wish you a great year. PS: please return the trolley now. Thanks."

Happy birthday to someone who I know is always watching over me. Love you @zoieakhtar .. wish you a great year. #siblinglove Ps: please return the trolley now. Thanks.

Farhan Akhtar frequently features in headlines for his relationship with Shibani Dandekar. They started dating in 2018. The actor was earlier married to celebrity hairstylist Adhuna Bhabani, with whom he has two daughters - Shakya and Akira. The actor was last seen in Shonali Bose's The Sky Is Pink, which also starred Priyanka Chopra, Zaira Wasim and Rohit Saraf. The film released last year and it was also screened at the Toronto International Film Festival.

The actor will next be seen in the sports drama Toofan, which has been directed by Rakeysh Omprakash Mehra. The film will be co-produced by Ritesh Sidhwani, Farhan Akhtar and Rakeysh Omprakash Mehra and it also features Paresh Rawal in a pivotal role. Farhan also produced the popular web-series Mirzapur 2, which is streaming on Amazon Prime Video.