"I can't make out difference at all besides the colours on pics! It's like a xerox copy," wrote one user on Instagram 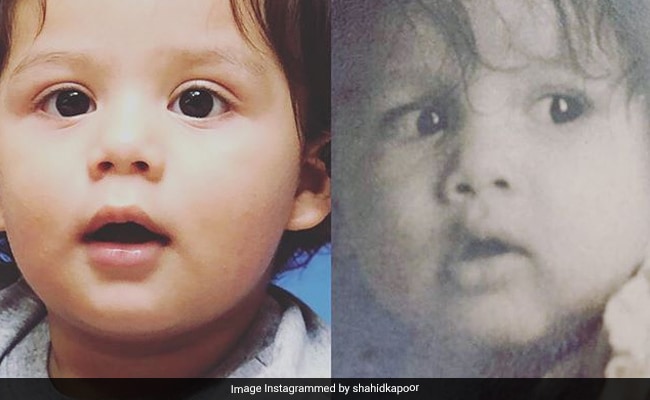 Actor Shahid Kapoor's latest post on Instagram will surely melt your heart. The Kabir Singh actor shared a side-by-side picture of himself and his son Zain, which grabbed the attention of the Internet quickly. Just a few minutes after posting the picture, Shahid Kapoor's fans on Instagram started comparing Zain to Shahid's child look and called him Shahid's "xerox copy." Sharing the post, which shows a picture of Zain (on the left) juxtaposed with a black-and-white photo of Shahid, who appears to be around the same age in the click, the actor wrote: "Spot the difference #likefatherlikeson."

Check it the picture, which received over four lakh likes in just an hour on Instagram:

Reacting to the "like father like son" post, Shahid Kapoor's actor brother Ishaan Khatter dropped a heart emoji in the comments section. Director Siddharth Malhotra commented: "I can't make out (difference) at all besides the colours on pics! It's like a xerox copy." Several Instagram users said that Zain looks a lot like Kareena Kapoor and Saif Ali Khan's son Taimur. "First one is Taimur second one is you," wrote one user while other commented: "At the very first moment I thought it was Taimur."

Sahid Kapoor frequently shares adorable pictures featuring Zain and his daughter Misha. Previously, he shared a video on Instagram, in which he could be seen trying out a new Instagram filter with Zain. He also shared a picture with Zain, in which he called his son "The sun."

Shahid Kapoor and Mira Rajput got married in the year 2015. The couple welcomed their first child Misha in 2016 and second child Zain in 2018.