Inside The Kapoors' Fam-Jam With Karisma, Riddhima, Neetu, Nikhil Nanda And Others (Bonus: Shweta Bachchan)

Can you guess who joined the Kapoors to make it an even fun lunch date? It was none other than Shweta Bachchan Nanda, who is married to Nikhil Nanda. 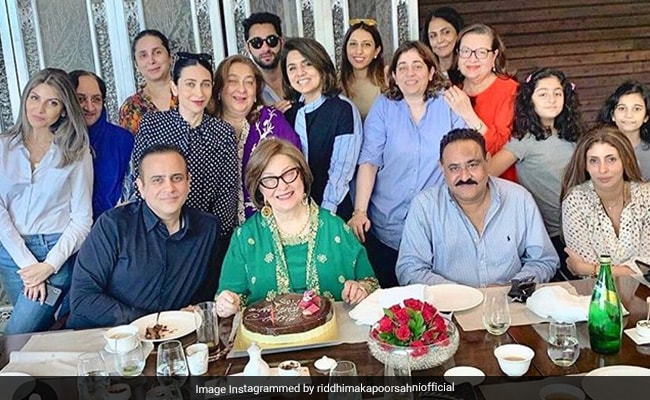 The Kapoors catch up every now and then in the Maximum City and looks like they did just that recently as a post-Diwali get-together. Karisma Kapoor (daughter of Randhir Kapoor) and Riddhima Kapoor Sahni (Rishi Kapoor's daughter) shared pictures from the family lunch but highlighted in the hashtags that they are "#missingafew". In the photo Instagrammed by Riddhima, she can be seen posing with her mom Neetu Kapoor, cousin Karisma, her mother Babita, Nikhil Nanda and his sister Nitasha Nanda with their mom Ritu Nanda and Armaan Jain and his parents Rima Kapoor and Manoj Jain. Armaan joined the lunch party also with his fiancee Anissa Malhotra while Riddhima also brought along her daughter Samara. Late actor Shammi Kapoor's wife Neila Devi also joined the family brunch.

But can you guess who was Nikhil Nanda's plus-one for the lunch date? It was none other than Shweta Bachchan Nanda, who is married to Nikhil Nanda. Shweta and Nikhil, who married in 1997, are parents to daughter Navya Naveli and son Agastya.

Sharing a glimpse of the Kapoors' fam-jam, Riddhima simply captioned it with the heart emoticon.

A post shared by Riddhima Kapoor Sahni (RKS) (@riddhimakapoorsahniofficial) on Oct 30, 2019 at 3:45am PDT

"Cousins love, missing a few," Riddhima captioned another photo, featuring the Kapoor cousins. Meanwhile, Karisma also Instagrammed updates from the family lunch, during which they enjoyed some Chinese delicacies. TBH, the "cousin love" pictures would have been complete with Kareena, Ranbir Kapoor, Aadar Jain and others but now, take a look at the photos here:

A post shared by Riddhima Kapoor Sahni (RKS) (@riddhimakapoorsahniofficial) on Oct 30, 2019 at 3:07am PDT

A post shared by Riddhima Kapoor Sahni (RKS) (@riddhimakapoorsahniofficial) on Oct 30, 2019 at 3:06am PDT

The Kapoors are a stylish lot and take their family events rather seriously and team up for stunning family photos on occasions like Ganesh Utsav, their ritualistic Christmas brunches every year and birthday parties, of course. We've curated some moments from the Kapoor fam-jams for you. You can thank us later:

Which one of these turned out to be your favourite? Tell us in the comments below.