Inside Kapoors' Ganesh Utsav: Taimur, Yash And Roohi Are The Cutest Ever Lunch Buddies 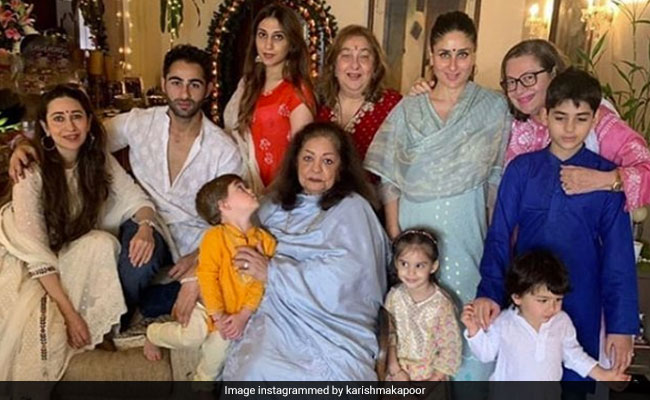 The Kapoors take their fam-jams very seriously and Tuesday was one such occasion when they celebrated Ganesh Utsav with a family lunch. Karisma Kapoor shared glimpses of her "Ganpati darshan" on her Instagram posts and stories. Spotted at the Ganpati puja were Kareena Kapoor and Armaan Jain, who also invited fiancee Anissa Malhotra. Kareena and Karisma's mother Babita can be seen posing with sister-in-law Rima Jain (Armaan Jain's mother) in the photo. The youngest generation at the fam-jam was adorably represented by Taimur Ali Khan and Karisma's son Kiaan Raj Kapoor. Pint-sized guests at the puja also included Karan Johar's twins Roohi and Yash, who came with KJo's mother Hiroo Johar.

Karisma Kapoor, shared this photo on her Instagram story with the caption "wonderful lunch", which has been curated by fan-clubs now. Needless to say, Taimur, Roohi and Yash, dressed in traditional picks from the kids' section, adorably stole the show.

Meanwhile, after RK Studio was sold off earlier this year, an emotional Randhir Kapoor had told Times Of India that the Kapoors will no longer host large-scale Ganesh Chaturthi celebrations: "That was the last Ganesh Chaturthi celebration for us. RK Studio hi nahi raha... to kahan karenge? Papa (Raj Kapoor) started the tradition 70 years ago with a lot of love for the Trunk God, but now, we don't have a place where we can hold the celebrations the way we did at RK Studio. We all love Bappa and have immense faith in him, but I guess, we can't continue with the tradition anymore."