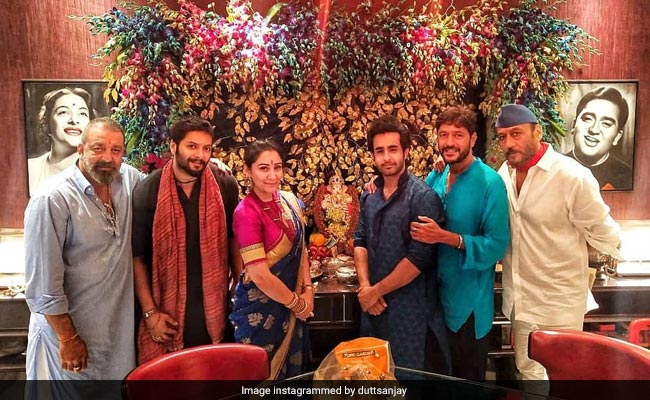 Sanjay Dutt gave his fans a glimpse of the Ganesh Chaturthi celebrations at his house along with his wife Maanayata and the cast of his forthcoming film Prasthanam. The photograph shared by Sanjay Dutt also features Jackie Shroff, Ali Fazal, Chunky Panday and Satyajeet Dubey. All the actor could be seen dressed in traditional outfits as they happily posed with the idol of Lord Ganesha. The actor shared the picture with his 2 million followers on Instagram, of which over 1 lakh fans have liked the picture. The caption on Sanjay Dutt's post read, "Seeking blessings from mom, dad and bappa with the Prasthanam team." He accompanied the post with the hashtag #GanpatiBappaMorya.

Without much ado, take a look at the post shared by Sanjay Dutt here:

Meanwhile, Maanayata Dutt, who has also produced the film Prasthanam, gave her fans a sneak peek of her look for the special occasion. Maanayata picked a blue saree,which she paired with a pink blouse. She finished her look with a statement neck piece and earrings. "If you are persistent you will get it... If you are consistent you will keep it," read the caption on her post." ICYMI, this is the post we are talking about:

If you are persistent you will get it.... if you are consistent you will keep it...#happyganeshchaturthi #festivalstyle #love #grace #positivity #dutts #prassthanam #beautifullife #thankyougod

May the blessings of Shri Ganesha be with you and your family forever... may your lives be filled with love peace and happiness #ganeshchaturthi #love #grace #positivity #dutts #festivalglam #prassthanam #beautifullife #thankyougod

Directed by Deva Katta, Prasthanam showcases the story of two sons of a political leader, who fight against each other to carry forward their father's legacy. The film is slated to release on September 20 this year.