Sagarika Ghatge and Zaheer Khan got engaged in April. The couple plans to get married later this year 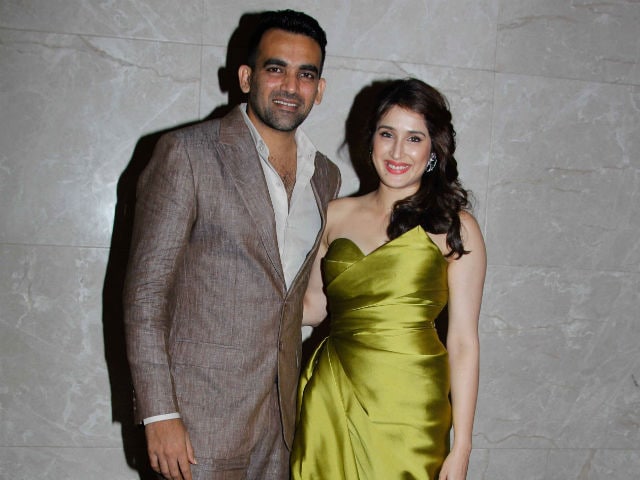 Zaheer Khan and Sagarika Ghatge photographed at their engagement ceremony

New Delhi: Star couple Sagarika Ghatge and Zaheer Khan got engaged in April. However, they officially exchanged rings in a grand ceremony held a month later in Mumbai. Anushka Sharma and Virat Kohli, Yuvraj Singh, Sachin Tendulkar and Anjali and many other celebrities attended their engagement ceremony. Sagarika, an actress, and Zaheer, an ex-cricketer, met through common friends and dated for two years before getting engaged. The couple now plans to get married later this year. In an interview to Mumbai Mirror, Sagarika, 31, said, "It could be towards the year end or a little earlier. We have shortlisted a few days but are yet to zero in on D-day."

Of her wedding to Zaheer, 38, Sagarika said, "Zaheer is so easy to be around and so grounded despite achieving so much. I have so much respect for him."

Sagarika and Zaheer announced their engagement on social media with two adorable posts. "Zak secretly planned our engagement for days; and I honestly had no clue. I had no idea that he had picked up such a pretty ring for me. I can't describe that moment and it will forever remain as something very special between us. We are really blessed," Sagarika told The Times Of India soon after their engagement.

Promoted
Listen to the latest songs, only on JioSaavn.com
Sagarika debuted as an actress in 2007 with Chak De! India, headlined by Shah Rukh Khan. Sagarika plans to focus on films even after marriage and told Mumbai Mirror, "Big or small, the medium doesn't matter. I'm guessing priorities will change after marriage but Zaheer is supportive of my decision knowing I love being on the sets."

Sagarika Ghatge and Zaheer Khan, we look forward to your grand wedding!