Inside Preity Zinta And Sussanne Khan's Party Diaries. A Night To Remember

Preity Zinta let her hair down after walking the ramp for designer label Falguni and Shane Peacock, also showcasing jewellery from the studios of Farah 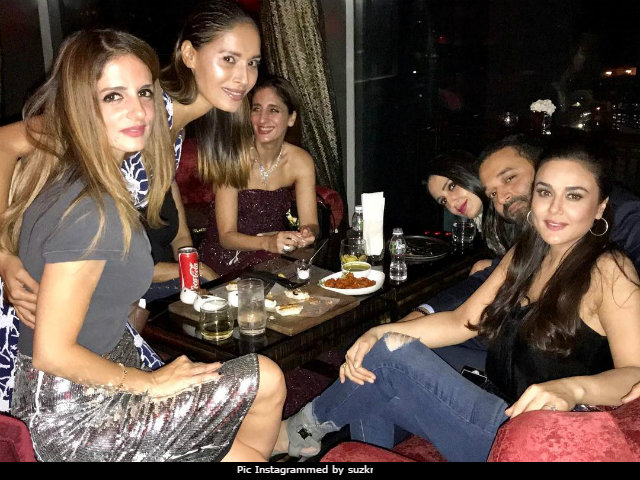 New Delhi: Actress Preity Zinta headlined a party on Saturday night, which appears to have been held after jewellery designer Farah Khan Ali's show at the Lakme Fashion Week on Saturday. The Lakme Fashion week reunited Preity with some of her closest friends - Farah and her sister, interior designer Susanne Khan. The 42-year-old actor let her hair down after walking the ramp for designer label Falguni and Shane Peacock, also showcasing jewellery from the studios of Farah. "Thank you Farah Khan Ali for asking me to be part of your Falguni Shane Peacock's show. I loved being part of it," Preity Instagrammed.

After her show, Farah shifted the party to a more happening location with her brother, actor Zayed Khan, model Ujjwala Raut and socialite Anu Dewan joining. Sussanne Khan is a co-owner of the brand The Label Life and arrived at the party with hand-picked wardrobe choices from her very own collection. "Thanks to my super silver sequins skirt last night I felt like a shiny disco ball," she Instagrammed along with a pic from inside the party.

See more pics from inside the after-party:

Thank you @farahkhanali for asking me to be part of your & @falgunishanepeacock 's show I loved being part of it Ting ! #showstopper #glamour #fashionweek #strikeapose #aboutlastnight

Saturday proved to be an eventful day at the Lakme Fashion Week - there appears to have been another reunion of sorts at the fashion gala with star wives like Kiran Rao, Anaita Shroff Adajania, Shruti Seth, Mini Mathur and Maria Goretti catching up.

Preity Zinta, who is rarely spotted at showbiz parties in Mumbai, shifted base to the US after marrying Los Angeles-based Gene Goodenough last year and now spends her year shutting between countries. Last seen in a cameo in Happy Ending, Preity Zinta is awaiting the release of her much-delayed film Bhaiyyaji Superhitt.
Comments
Preity ZintaPreity Zinta party