"This one's going to go down in history for many reasons," Neha Dhupia wrote for photos of daughter Mehr 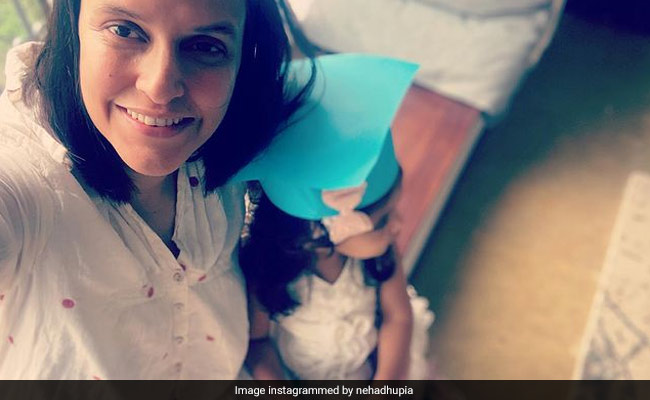 Actress Neha Dhupia's Instagram is a scrapbook of her daughter's milestone moments. On Friday, the 40-year-old actress shared a bunch of photos from 2-year-old Mehr's "first graduation day." Yes, you read that right. From Neha Dhupia's post, it appears that Mehr just graduated from pre-school and had a little celebratory party at home with her pint-sized friend. Mehr and her friend Rika had a virtual graduation ceremony, for which they dressed up as little fairies. The pint-sized graduates even sported cute little graduation hats for the ceremony! Now, how cute is that?

Neha Dhupia, who couldn't help but fill up her camera roll, posted a bunch of photos and poured her heart out in the caption: "Our big little girls' first ever graduation day. This one's going to go down in history for many reasons. Thank you, our lovely teachers and thank you, our little girls. Uff! My heart is full."

Mehr's first graduation party had sugar, spice and everything nice:

Mehr frequently features on her mother's Instagram. Earlier, Neha Dhupia shared this ROFL post about Mehr's painting sessions. "We promise you no paper was wasted during this art session," she wrote.

Neha Dhupia and Angad Bedi got married in a sudden and hush hush wedding in May 2018 at a gurudwara in Delhi. Later, they revealed they rushed with the wedding as Neha was pregnant. Mehr Dhupia Bedi was born to the couple in November 2018. In terms of work, Neha Dhupia was last seen in 2020 short film titled Devi. She also features as a Gang Leader on MTV Roadies.