Inside Madhuri Dixit And Shriram Nene's Date Night In Maldives

Of beaches, moonlight, candlelit dinner and the perfect company 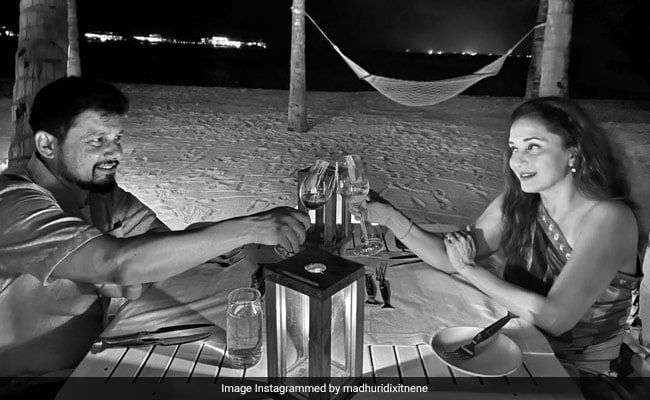 Madhuri Dixit and husband Shriram Nene, who are making memories together in Maldives, gave their Instafam a glimpse of their date night on the beach and it was things perfect what with sand, moonlight, candlelit dinner and the company of their loved ones. The actress and her husband shared dreamy greyscale pictures from their evening together. Sharing the picture on Instagram, Madhuri wrote: "Nothing like a candlelit dinner. Cheers." Posting the same picture, Shriram Nene wrote: "Nothing like toasting to life and love." The couple flew to Maldives earlier this week and they have actively been sharing pictures from their time together.

See the picture from their date night:

Madhuri Dixit shared this stunning shot of herself from last night and she wrote: "Cheers to all of you." Shriram Nene too posted a solo shot of himself and added the same caption. See their posts here:

Just in case you didn't know, this is how much Madhuri Dixit and Shriram Nene are having in the island nation these days: