What's Going On? Only Madhuri Dixit Can Explain This ROFL Pic

To put it simply, the family moment from Madhuri Dixit's household will indeed crack you up 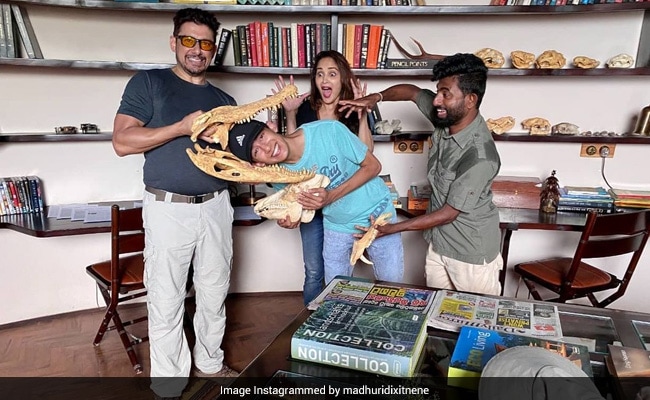 Madhuri Dixit, who's Instagram is all about family moments, added one more to the list on Thursday. Sharing an ROFL moment, featuring her husband Sriram Nene and their son Arin, Madhuri asked her Instagram family to help her out with the caption. In the photo, Sriram Nene can be seen holding what appears to be a mock-up of a dinosaur fossil. Arin chose a hilarious pose - he placed his head in between the fossil jaws and but looks like he willingly did so - look at the smile on his face! Madhuri, for her part, tries to infuse some thrill and scare into the situation with her expression. To put it simply, the family moment from Madhuri Dixit's household will indeed crack you up. Madhuri's Instafam came up with caption suggestions like: "Batata wada."

Madhuri Dixit and Sriram Nene celebrated their 21st wedding anniversary in October last year. Apart from Arin, they are also parents to a younger son Ryan. On Arin's 18th birthday, Madhuri posted this adorable message on Instagram: "My baby is officially an adult. Happy 18th birthday, Arin. Just remember that with freedom comes responsibilities. From today the world is yours to enjoy, protect and brighten."

Arin and Ryan "will always be my babies," wrote Madhuri Dixit once: