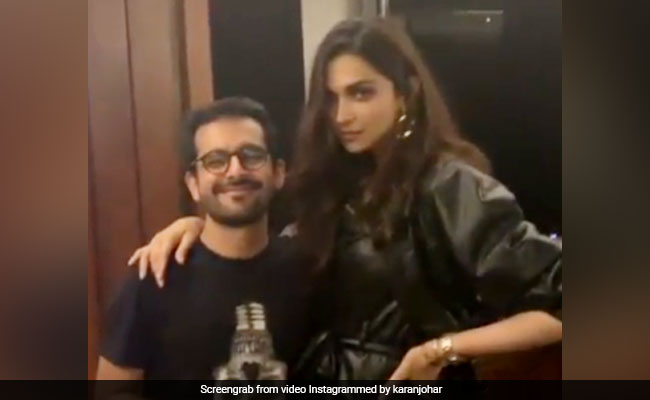 Deepika Padukone in a still from the video. (Image courtesy: karanjohar)

Filmmaker Karan Johar sure knows how to turn a casual Saturday night into a perfect party night and his latest get-together for his Bollywood friends proves it. He recently hosted a party and shared a video from the gathering on his Instagram account, which is trending for featuring famous Bollywood faces such as Deepika Padukone,Ranbir Kapoor, Arjun Kapoor, Malaika Arora, Shahid Kapoor and his wife Mira Rajput, Varun Dhawan and his girlfriend Natasha Dalal, Vicky Kaushal, filmmakers Zoya Akhtar and Ayan Mukerji. Going by the clip, it seems like the stars spent some chill time at Karan Johar's residence.

Sharing the video, Karan Johar captioned it: "Saturday night vibes." The video starts with Deepika Padukone posing in her little black dress with her friend and is followed by Malaika Arora, who winks to the lens before the camera moves towards her boyfriend Arjun Kapoor, who is caught by surprise. Arjun can be seen having a chit-chat with Shahid Kapoor, when the camera moves to on to the couch, focusing on Varun Dhawan, his brother Rohit Dhawan and filmmaker Zoya Akhtar. The video captured Varun and Zoya having a deep conversation. From there, the camera moves towards Vicky Kaushal, Ayan Mukerji and Natasha Dalal. The final part of the footage shows Ranbir Kapoor, dressed in a black t-shirt, sitting next to Mira Rajput on another couch.

We missed Ranveer Singh and Alia Bhatt in the party clip. Ranveer is shooting for '83 in the UK while Alia is currently vacationing with her mother Soni Razdan and sister Shaheen Bhatt in Ooty.

Excited much to watch the clip? Check it out:

Deepika Padukone is busy shooting for Kabir Khan's '83, in which she will share screen space with husband Ranveer Singh, who will play cricket legend Kapil Dev in the film.

Varun Dhawan is prepping for his upcoming film Street Dancer 3D and Vicky Kaushal's lined-up films include a biopic on Field Marshal Sam Manekshaw, Udham Singh biopic, Bhoot Part One: The Haunted Ship and Takht. Arjun Kapoor will next be seen in Panipat while Ranbir Kapoor will next feature in Ayan Mukerji's Brahmastra, which also stars Alia Bhatt.