"Last night was a house full of fun with friends from Housefull 1, 2, 3 and 4," wrote Akshay Kumar 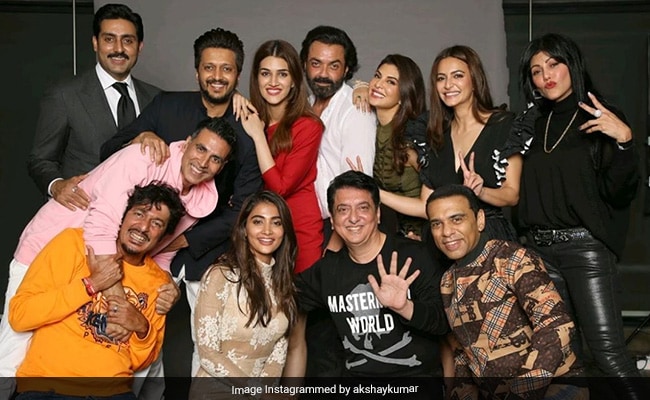 Housefull : Akshay Kumar with other stars from the film. (Image courtesy: akshaykumar )

Akshay Kumar had a super fun weekend and his latest Instagram entry proves just that. On Monday, the 52-year-old actor gave us a glimpse of his star-studded get-together along with his Housefull co-stars. Akshay, who recently featured in the comedy film

Akshay Kumar captioned the post: "Last night was a house full of fun with friends from Housefull 1, 2, 3 and 4. Gearing up for 5? I don't know." Take a look at Akshay Kumar's post here:

Akshay Kumar, Riteish Deshmukh and Chunky Panday have been a part of all the installments of the Housefull series. Jacqueline Fernandez featured in the second and third part, while Abhishek Bachchan starred in the third part of the series. Kriti Sanon, Pooja Hegde, Bobby Deol and Kirti Kharbanda are the latest addition to the Housefull family.

Housefull 4 released on Diwali this year and it opened to largely poor reviews. The film clashed with Saand Ki Aankh, featuring Taapsee Pannu and Bhumi Pednekar in the lead roles, and it emerged as a clear winner in terms of box office success. The first installment of Housefull released in the year 2010 and it also starred Deepika Padukone and Lara Dutt in the lead roles.