Housefull 4 box office collection: The film reportedly did lesser than expected because of pre-Diwali festivities. 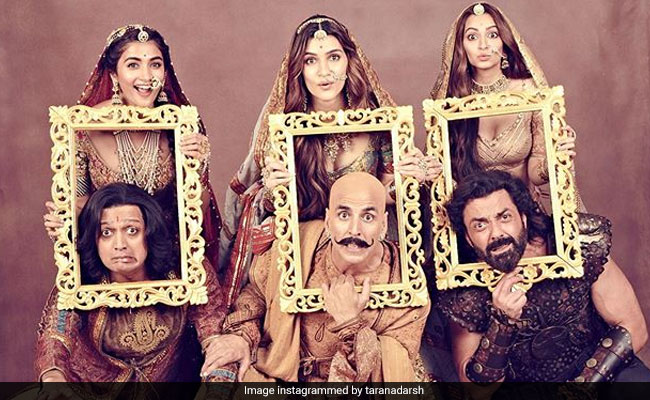 Housefull 4, Akshay Kumar's latest film, is off to a decent start with Rs 18 crore in its kitty on the opening day, reported trade analyst Taran Adarsh. The ensemble cast of the Farhad Samji-directed film includes Riteish Deshmukh, Bobby Deol, Kriti Sanon, Kriti Kharbanda and Pooja Hegde. The film opened to poor reviews on Friday, however, it did not translate into bad business for the film on the first day. The film's Day 1 collection is slightly lower than expected, which Taran Adarsh and Box Office India attributed to the pre-Diwali festivities. "Housefull 4 puts up a healthy number on Day 1... business did not grow in evening due to pre-Diwali festivities... Day 4 (Monday) is extremely crucial, when Diwali celebrations begin and families throng cinema halls... Friday India business is Rs 18.85 crore," Taran Adarsh tweeted.

"The film did slow in the evening due to pre-Diwali but still is the second highest opening ever for a comedy film and the highest opening for the Housefull franchise despite pre-Diwali," the Box Office India report added.

Meanwhile, the fourth film in the Housefull franchise is currently at the top of its number game. The first Housefull film, which released in 2011, collected a little over Rs 9 crore on the opening day, 2012's Housefull 2 collected Rs 12 crore and Housefull 3 (released in 2016) made Rs 15 crore. "The gains each installment have made are in the 20-30% range though in terms of lifetime business Housefull 2 remains the best one as Housefull 3 fell a little short of Housefull 2 despite a better start," Box Office India stated.