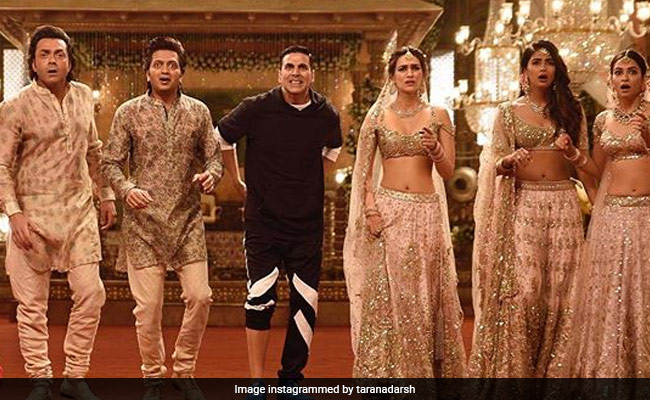 Akshay Kumar's latest film Housefull 4 remains "steady" at the box office, reported Bollywood trade analyst Taran Adarsh. The film, which released on Friday, collected over Rs 18 crore on Saturday, bringing the overall earnings to Rs 37.89 crore, stated Taran Adarsh in his report. Housefull 4 is expected to show growth in numbers on weekends due to Diwali holidays. Sharing the box office performance of the film, Taran Adarsh wrote: "Housefull 4 is steady on Day 2... Saw gains in some circuits, was down in few... Business on Mon is pivotal when #Diwali holidays begin... Tue-Thu business is crucial, if it has to post a solid total... Fri 19.08 cr, Sat 18.81 cr. Total: Rs 37.89 cr. #India business."

Housefull 4, which features Akshay Kumar, Riteish Deshmukh, Bobby Deol, Kriti Sanon, Kriti Kharbanda and Pooja Hegde in the lead roles, had a blockbuster opening on Friday. It collected Rs 18 crore at the box office on day 1.

The film opened to middling reviews, which hasn't dented it's box office appeal till now. NDTV's Saibal Chatterjee gave the film 1 stars out of 5 and wrote: "The dialogues, written by director Farhad Samji, play out in the same vein all through the outlandish film, reportedly the costliest comedy every made in Mumbai. It is all rhyme and no rhythm... This film's obsession with animal excreta is monumental. Housefull 4 is like a pig."

Directed by Farhad Samji and produced by Sajid Nadiadwala, Housefull 4 is the fourth installment of the Housefull franchise.