"I like Bala's moochh more on me... What say?" wrote Kriti Sanon 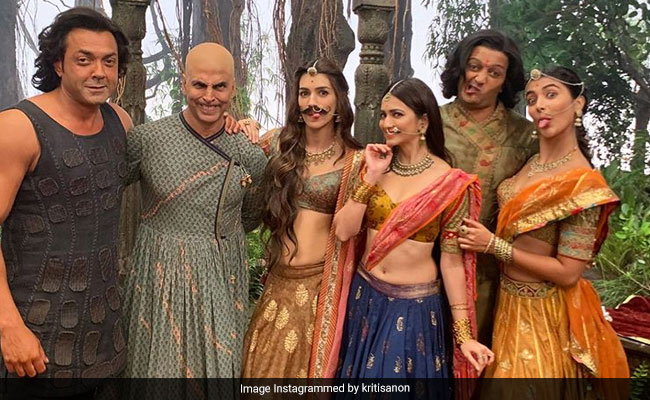 If you are having a dull day, Kriti Sanon's latest post will surely cheer you up. The 29-year-old actress, who will next be seen in Housefull 4, posted a picture of herself and the rest of the star cast of the film including Akshay Kumar, Riteish Deshmukh, Pooja Hegde, Kriti Kharbanda and Bobby Deol on Wednesday and it will leave you in splits. In the picture, they all can be seen making funny faces while posing for the camera on the sets. Not to miss, Kriti Sanon sporting Akshay Kumar's character Bala's fake moustache is absolutely hilarious. Posting the picture on her Instagram profile, Kriti Sanon wrote: "Absolutely cracked bunch! While some are quirky and some sober, I like Bala's moochh more on me... What say?"

Did you like Bala's moochh on Kriti Sanon? Do tell us in the comments section.

Housefull 4, which is the fourth installment of the Housefull series, is a reincarnation comedy. Other than the aforementioned star cast, the film also features Chunky Panday and Johnny Lever. It shuttles between different time frames - one part is set in 1419 and the other one in 2019. Akshay Kumar will play the role of a warrior named Bala in 1419 while in the current times, he will play Harry.

Directed by Farhad Samji, Housefull 4 is slated to release on October 25.