Housefull 4 Trailer: Everyone's Confused Over Who's Who In Akshay Kumar's Laughter Riot 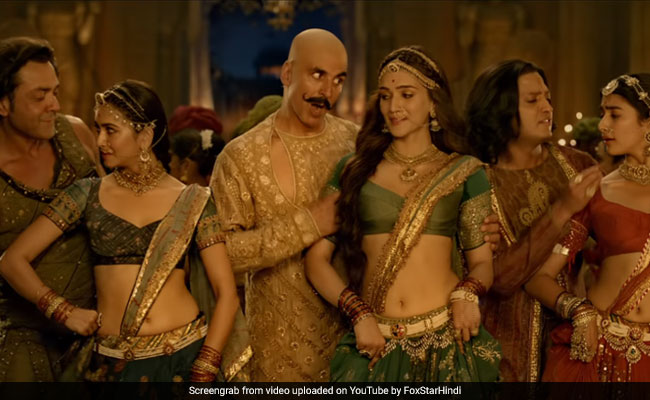 Housefull 4 trailer is indeed "crazy and chaotic", just like Akshay Kumar had promised. The Housefull 4 trailer reveals the crux of the storyline at the beginning that the reincarnation comedy is set in two time periods: 1419 and present times. Then the trailer shifts to the king of Sitamgarh organising for a swayamvar for his daughters. The king zeroes in on warrior Bala (Akshay Kumar) for Kriti Sanon (Madhu), Bobby Deol (Dharamputra) for Kriti Kharbanda (Meena) and nartaki Bangdu Maharaj (Riteish Deshmukh) for Pooja Hegde (Mala). The first half also offers menacing glimpses of Rana Daggubati, who has replaced Nana Patekar in the film to play the villain. What follows are Baahubali-like action sequences in the trailer, in which Bala and Rana's character go to war.

The Housefull 4 trailer fast-forwards the timeline to 2019, when Akshay Kumar is introduced as Harry, Riteish Deshmukh is Roy and Bobby Deol is Max. Akshay Kumar, who can remember the happenings of his past life as Bala, suddenly realises he is engaged to be married to Pooja Hegde, who is Pooja now. Modern day Riteish's love interest in the film is Kriti Kharbanda, who is Neha now where as the 2019 version of Bobby Deol is in love with Kriti Sanon, who is Kriti in this life.

In a failed attempt, Akshay tries to explain who's actually who with reference to 1419 to his friends in an ROFL "uski biwi uski biwi nahi hai... teri biwi hai..." kind of a lengthy dialogue, which leaves all of us confused. That's the point, we guess. "Kaun hogi kiski patni, aur kiski bhabhi hogi kiski biwi! Ek entertaining kahaani laa raha Housefull 4 trailer," Akshay tweeted while sharing the trailer.