"Do I look upset? I am from that era where I have heard a lot of people say a lot of things. But I have never said anything," said Akshay Kumar 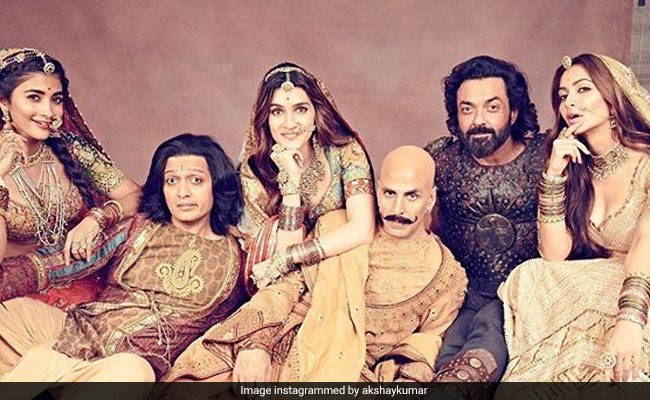 Days after a section of trade pundits in Bollywood decided to not share details of Housefull 4's performance in theatres over the controversy about the film's team sharing alleged inflated box office numbers, Akshay Kumar reacted to the issue in a group interview recently, reported news agency PTI. When asked if the box office controversy has offended him, the 52-year-old superstar told reporters: "Do I look upset? I am from that era where I have heard a lot of people say a lot of things. But I have never said anything. In my school, I was taught, 'Mind your own business'," PTI quoted him as saying.

When further questioned on the issue, Akshay appeared to avoid divulging details and simply said: "It doesn't make a difference. What will I do? You can talk to theatre owners. You will keep asking me this same question four times to get an answer. The answer is I am not writing all this. These people are writing it. I am not running anything. My point of view is very simple, whatever comes in front of the media as you react to it, I react to it. So, there is nothing new about it."

However, Akshay cited Fox Star Studios' reputation to highlight that a production house of such a stature would not meddle with a film's box office numbers. In a rather sarcastic tone, Akshay said: "There is a studio called Fox Star Studios (involved with the film). It has a big credibility. It is a corporate. It runs from LA. It is not possible. We should use our brains. They make films of millions and millions of dollars and for them to increase by three or five nothing will happen. So, let's talk sense. They (Fox Star Studios) are writing it on their own (Twitter) handle and it goes everywhere, they have to report to everyone. Nobody is going to lie for this." Housefull 4 has been co-produced by Fox Star Studios and also Sajid Nadiadwala.

When asked about some trade analysts' decision to not share Housefull 4's box office numbers with the audience, Akshay said: "If a corporate won't put then anyone else will put it. It is like an open book, one can call theatres and you can calculate it. I don't think so we shouldn't put it, we should put it."

Meanwhile, multiplex owners revealed in a recent statement that Housefull 4 has witnessed a blockbuster response in theatres, PTI reported. Speaking to the news agency, CEO of PVR Pictures Kamal Gianchandani said in a statement: "This Diwali has been truly Housefull 4 waali! We have never seen such huge group bookings at our plexes. From the day it has opened on Friday, it has grown many folds on Monday, Tuesday and is still growing stronger even on weekdays. Housefull 4 has emerged kids' favourite movie of the season and they couldn't stop laughing throughout this comic caper."

The PTI report also added that Rajender Singh Jiyala, chief programming officer of INOX said, "HouseFull 4 has received stupendous response across INOX plexes. It has been loved by all age groups, especially family audiences, who have welcomed it wholeheartedly. This Diwali we couldn't ask for more as it reaffirms our belief that comedy movies work wonders during the festival season."

Housefull 4 completed a week-long run in theatres on Friday and on Saturday, Fox Star Hindi tweeted that the film has scored Rs 149.36 crore so far. Housefull 4 actor Riteish Deshmukh said the film is on its way to touch the Rs 150 crore mark in the caption to an Instagram video.

As #Housefull4 approaches the 150cr mark - time to do the #balachallenge with my #halloween cubs Riaan & Rahyl - mommy @geneliad shoots the video.