In Pic: Kiara Advani, "Back At The Cinemas," Watched Her Own Film With Family

"Missed the big screen so much," wrote Kiara Advani 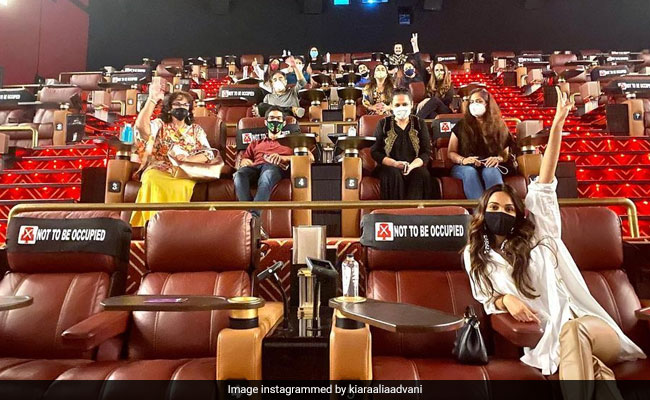 Kiara Advani's film Indoo Ki Jawani is all set to hit the screens on Friday. Ahead of the film's release, the actress watched the movie in a theatre along with her family. On her Instagram profile, an excited Kiara posted a picture of herself along with her family from the theatre and she shared her experience in her caption. Kiara wrote: "Finally! Back at the cinemas. Missed the big screen so much! Watched Indoo Ki Jawani with my family last night and the experience was surreal." She added, "Super service and sanitisation. Can't wait to meet you at the movies with your friends and family. See you there from tomorrow, it's a date."

Indoo Ki Jawani was slated to release on June 5. However, the film's release date was pushed a few months due to the coronavirus pandemic and the cinema halls being shut. The film showcases the story of a girl named Indoo Gupta, from Ghaziabad. Indoo is an active user of dating apps. However, her life leads to a comedy of errors when she meets a guy from Pakistan (played by Aditya Seal). The film has been directed by Abir Sengupta and it has been co-produced by Monisha Advani, Madhu Bhojwani, Nikkhil Advani, Niranjan Iyengar and Ryan Stephen. Indoo Ki Jawanialso features comedian Mallika Dua as Kiara's bestie. The film's song tracks have been trending big time already.