Can you spot Hrithik Roshan in this throwback photo? 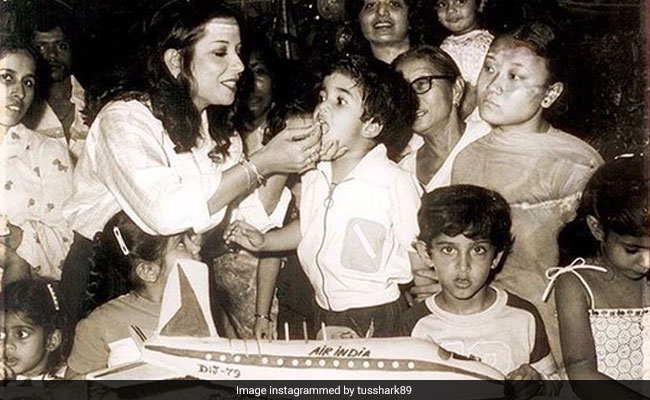 On Shobha Kapoor's birthday, Tusshar Kapoor wished his mother with a black and white throwback photo and an adorable birthday wish: "Happy birthday, mom. Gratitude, every single day," Tusshar captioned the photo, in which Shobha Kapoor can be seen treating a young Tusshar a piece of cake. Meanwhile, the Internet noticed that Tusshar's throwback photo has more than one actor in the making. Tusshar's Instafam spotted little Hrithik Roshan standing in front of the birthday cake with a quizzical expression on his face. "Hrithik in the front!" wrote an excited fan while another added: "Hrithik on the right side." Several users also urged Tusshar to tag Hrithik in the photo. Comments about Hrithik Roshan being adorable in the throwback memory flooded Tusshar Kapoor's feed.

Here's what Tusshar Kapoor posted. Can you spot Hrithik Roshan in this throwback?

Well, if you think is a major blast from the past, wait for it... there's more. A few years ago, pint-sized versions of Hrithik Roshan, her sister Sunaina Roshan, Tusshar Kapoor and his sister Ekta Kapoor, featured in an extreme throwback, spotted and shared by Twinkle Khanna. "The girl with the broken arm is me...," Twinkle had captioned a part of her post and our guesses would be the kids seated on the left are Hrithik and Sunaina while Tusshar and Ekta stand right behind them.

The girl with the broken arm is me- every year I would invariably be in a cast-many fractured bones-took that unpleasant factor and flipped it into a moniker that now makes me smile-Mrs Funnybones :) https://t.co/J6iNSdQmA7

In terms of work, Hrithik Roshan was last seen in War and has Krrish 4 in his line-up, which will be directed by his dad Rakesh Roshan. Tusshar Kapoor was last seen in 2017 movie Golmaal Again, after which he produced a few projects. He will next be seen in upcoming sports drama Jersey, headlined by Shahid Kapoor.