Like the girls at the orphanage, Priyanka Chopra too looked 'love struck' 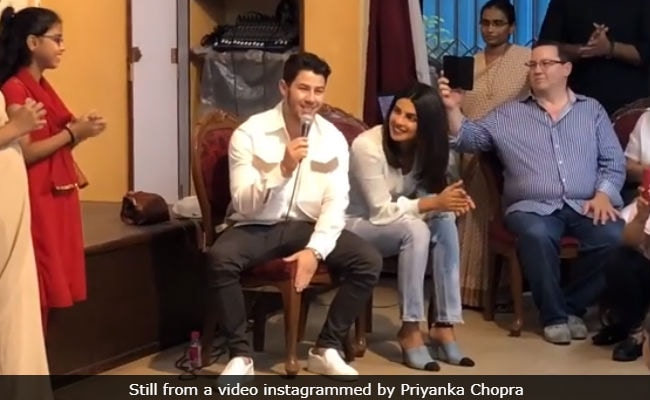 Priyanka Chopra shared a snippet her visit to the orphanage with Nick Jonas, which shows her fiancé singing Jonas Brothers hit Lovebug for the girls and needless to say, the video has gone viral within minutes. Priyanka's video had nearly 1.5 lakh views in the first five minutes of being posted. Priyanka and Nick made their relationship official over the weekend with a roka ceremony and one of the first things they did as a couple was to visit an orphanage in Mumbai. "12 years of knowing these girls and they get all love struck by the Love Bug. Thank you, Nick Jonas and our families. Thank you to the sisters and all the girls at St Catherine's orphanage for opening your hearts to us again. I'll see you next time," Priyanka captioned the video.

12 years of knowing these girls and they get all love struck by the #lovebug... thank you @nickjonas and our families. Thank you to the sisters and all the girls at St. Catherine's orphanage for opening your hearts to us again. I'll see you next time

Here's the original track from the Jonas Brother's 2008 album A Little Bit Longer:

Earlier, Nick Jonas has shared a video of Priyanka dancing with the girls at the orphanage, which was picked up and shared by several fan clubs.

Priyanka Chopra and Nick Jonas shared pictures from their roka ceremony and engagement party over the weekend, confirming their relationship for the first time. Priyanka and Nick shared same 'love stuck' pictures on Instagram with different captions. "Taken.. With all my heart and soul," wrote Priyanka while Nick Jonas wrote: "Future Mrs. Jonas. My heart. My love."

The intimate ceremony was attended by close friends and few members of the Chopra and Jonas families - Priyanka's cousin Parineeti and Nick's parents Denise Miller and Kevin Jonas, Sr were in attendance. The roka ceremony was followed by an engagement party, which was attended by Alia Bhatt and the Ambanis. Pictures from both ceremonies were shared on social media.

After the ceremonies, the Jonas family left for USA while Priyanka, who starts filming Shonali Bose's The Sky Is Pink soon, stayed in Mumbai.