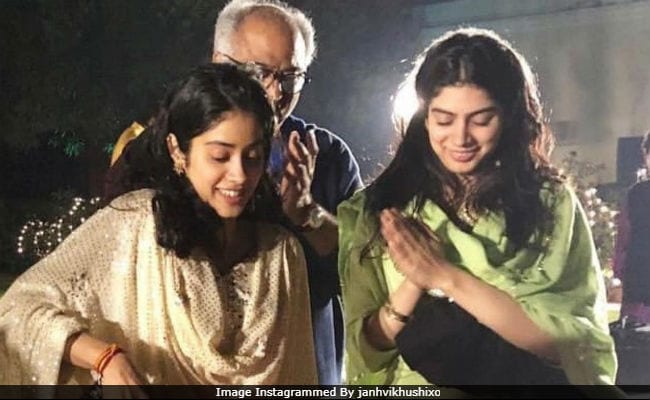 Actress Janhvi Kapoor, 22 today, had a small birthday celebration with her father Boney Kapoor and sister Khushi in Varanasi, where she is currently filming Gunjan Saxena biopic, reportedly titled Kargil Girl. Pictures from Janhvi's intimate birthday party have been shared by several of her fan clubs on Instagram and she also spoke to Mumbai Mirror about checking in to Varanasi on her special day. She was filming Kargil Girl in Lucknow for sometime. "We drove to Varanasi after the day's work so I could see the Ganga aarti and go to the Kashi Vishwanath temple," the Dhadak actress told Mumbai Mirror. In the pictures, Janhvi can be seen cutting her birthday cake with a sword and she is surrounded by Boney Kapoor and Khushi. They also went for a boat ride on the banks of river Ganga in Varanasi.

In an Instagram post, Janhvi also thanked her fans for their best wishes and wrote, "Thankful and grateful. For all your love and blessings, for every opportunity, for my family, for my country. Love you all."

Thankful & grateful. For all your love and blessings. For every opportunity. For my family. For my country. Love you all!

In her interview to Mumbai Mirror, Janhvi also added that she wanted to go to Tirupati, but the 'arrangements could not be made'. "I wanted to visit Tirupati again. Mom (Sridevi) used to climb up to the temple every year for her birthday when she was working. I went there earlier this year and wanted to go again on my birthday, but arrangements couldn't be made on time I might go next week," she said.

Janhvi is the elder daughter of late actress Sridevi and filmmaker Boney Kapoor. She debuted in the film industry with 2018's Dhadak. The Gunjan Saxena biopic and Karan Johar's Takht are Janhvi Kapoor's upcoming films.