In New Post, Sonali Bendre Reveals Why She 'Panicked' After Her Chemotherapy Sessions 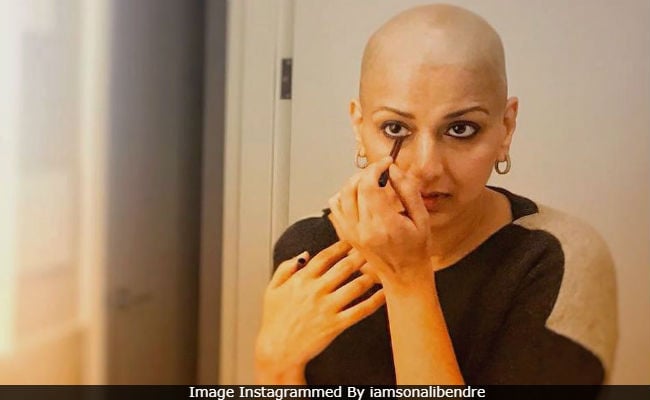 Actress Sonali Bendre, who is battling cancer in New York, is keeping her book club up and running. In a new post shared on Friday, the actress announced the next book that will be discussed on her next book club session. However, she also opened about the difficulties she had to face while reading a book in between her chemotherapy sessions and why she 'panicked.' "Time to announce the next book! The last one took a while, as my eyesight was doing strange things due to the chemo and I couldn't read for a while. Was panicking a bit, but now all is well again," read an excerpt from Sonali Bendre's post.

A Little Life by Hanya Yanagihara is Sonali's next read, which will also be up for discussion. "We've read books with female friendships before, but this is our first one on friendship among boys. Should be interesting. Can't wait to start reading it and I hope you read it with me too," she wrote.

Time to announce the next book! The last one took a while, as my eyesight was doing strange things due to the chemo and I couldn't read for a while. Was panicking a bit, but now all is well again! Whew! The next book for SBC is set in the city I'm currently in, New York... it's called A Little Life by @hanyayanagihara. It's been nominated for so many literary awards and is a story of friendship and ambition. We've read books with female friendships before, but this is our first one on friendship among boys... Should be interesting. Can't wait to start reading it, and I hope you read it with me too. #SBCBookDiscussion #SBC #SonalisBookClub

Sonali Bendre started a digital book club on Facebook last year. After she moved to the US for treatment, her friends Dia Mirza, Sussanne Khan and Gayatri Joshi took over the club for her. In August, the trio organised for a conversation as part of Sonali's Book Club, which was also live streamed on her Facebook profile.

Sharing a photo from the meet, Sonali wrote:

I've said it before and I'll say it again... "I have the best friends in the world!" Thank you sooooo much @gayatrioberoi, @suzkr and @diamirzaofficial for coming together to celebrate Friendship Day with #SBC... I had so much fun watching this... So glad some of my influence has rubbed off on you hahaha Special thank you to @janiceseq85 for ensuring a smooth and lively conversation. I truly truly appreciate it. #SonalisBookClub

Sonali Bendre had debuted as an author in 2015 with The Modern Gurukul: My Experiments With Parenting.

Sonali Bendre moved to the Big Apple in July for cancer treatment. She was accompanied by filmmaker husband Goldie Behl.

On Instagram, she has chronicled her fight with cancer "#OneDayAtATime" with inspiring posts and also wrote about her high and low moments during the chemotherapy sessions.

"I knew that if I allowed fear to overtake me, my journey was doomed. Fear, to a great extent, is born of a story we tell ourselves, and so I chose to tell myself a different story from the one women are told. I decided I was safe. I was strong. I was brave. Nothing could vanquish me." - Cheryl Strayed, Wild. Over the past couple of months, I have had good days and bad ones. There have been days when I've been so exhausted and in so much pain that even lifting a finger hurt. I feel like sometimes it's a cycle... one that starts off with physical pain and leads to mental and emotional pain. The bad days have been many... Post chemo, post-surgery and the like... where even just laughing hurts. Sometimes it felt like it took everything I've had to push past it... a minute to minute battle with myself. I got through it knowing that even though I was fighting a long drawn out, draining battle... it was one that was worth the fight. It's important to remember that we're allowed to have those bad days. Forcing yourself to be happy and cheerful all the time serves no purpose. Who are we being fake and putting on an act for? I allowed myself to cry, to feel the pain, to indulge in self-pity... for a short while. Only you know what you're going through and it is fine to accept it. Emotions aren't wrong. Feeling negative emotions isn't wrong. But after a point, identify it, recognize it and refuse to let it control your life. It takes an immense amount of self-care to get out of that zone. Sleep always helps, or having my favourite smoothie after chemo, or just talking to my son. For now, as my treatment continues... my visual focus remains to just get better and get back home. It's yet another test... Student all my life... Learning all my life... #OneDayAtATime : @srishtibehlarya

While in New York, Sonali Bendre caught up with actors Anupam Kher, Rishi Kapoor, who is also in the US for medical treatment and actress Priyanka Chopra. Sonali was also a part of Priyanka's bridal shower.