Model Rajeev Sen has confessed in an Instagram exchange with wife, actress Charu Asopa, that he keeps an eye on her whereabouts. His comment arrives amid the rumours about their separation - Rajeev Sen is in Delhi and Charu Asopa is living in Mumbai. The couple have been reportedly living separately since June. On Charu Asopa's latest Instagram post, the caption on which read: "Khairiyat nahi puchte meri magar khabar rakhte hain. Maine suna hai ki wo mujh par hi nazar rakhte hain (They do not ask me about my well-being but stay updated about me. I have heard, they keep a track of my whereabouts), Rajeev Sen commented: "Kya kare khabar rakhna padta hai, itni chulbul jo ho aap (What can we do? We have to keep a track of your whereabouts you because you are so playful)."

However, it was Charu's reply to Rajeev's comment that grabbed the attention on their fans. In her reply, Charu called her husband Byomkesh Bakshi (a fictional detective character) and wrote: "Khabar rakhna achhi baat hai, Mr Byomkesh Bakshi. Kabhi khairiyat bhi liya karo (It is nice to stay updated, Byomkesh Bakshi but you should also ask about my well-being sometimes)." 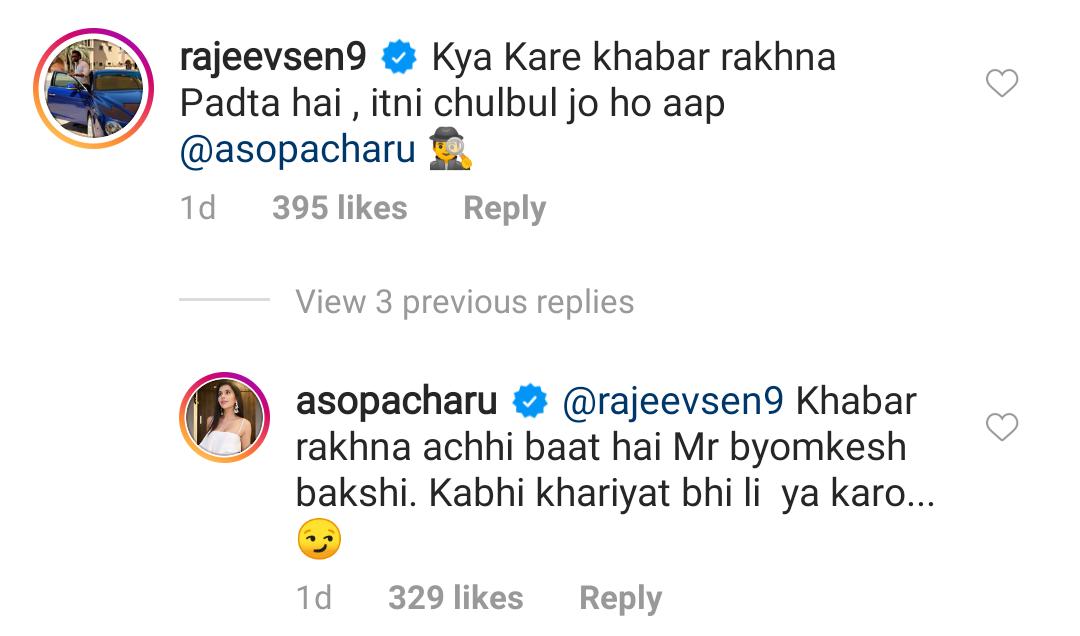 Recently, when Charu Asopa posted pictures from her Ganesh Chaturthi celebrations, Rajeev left this loved-up comment: "Hubby is coming to you, jaldi se." Last month too, Rajeev Sen shared a photo of himself talking to Charu Asopa on a video call and captioned it: "To all our fans who love us unconditionally." The couple's recent Instagram exchanges can be seen as a hint that everything is fine between them.

Reports about Rajeev Sen and Charu Asopa's separation surfaced on the Internet in June. Since then, the couple have addressed their separation rumours in several interviews. In July, both Charu and Rajeev Sen deleted pictures featuring each other from their social media profiles and unfollowed each other on Instagram. Rajeev moved to Delhi days before their first wedding anniversary that falls on June 7.

Talking to SpotboyE this month, Charu Asopa addressed her relationship with Rajeev Sen and said: "Everybody knows this - Rajeev is in Delhi and I am staying here in Mumbai alone. Beyond this I am also asking God, 'Ab aage kya?' I am also waiting for God's directions."

Earlier, Rajeev had alleged in an interview with the Times Of India that someone close to Charu is "brainwashing her." However, the actress dismissed the allegations in a separate interview, where she said: "No one is brainwashing me. I am mature enough to make my own decisions - something that I have always done. Maybe, he was brainwashed into deleting our pictures from his social media handles."

Rajeev Sen and Charu Asopa, after dating for four months, got married in a civil ceremony on June 7 last year, followed by a grand celebration in Goa.