In Deepika Padukone's Throwback Photo, Can You Guess The Actor Posing For The Camera? 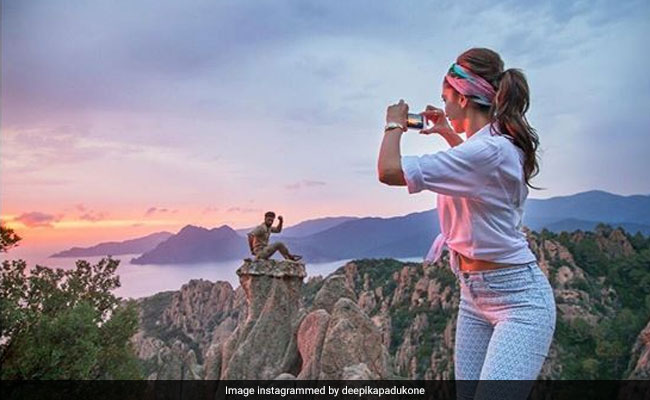 On World Photography Day, Deepika Padukone shared a throwback photo from the sets of her film Tamasha and guess, who else features in the pic? It is Ranbir Kapoor, who was also part of the Imtiaz Ali-directed film. Deepika shared a post on Instagram where she can be seen clicking a photo of Ranbir Kapoor, who appears to be posing from a far-off cliff. The photo has been shot in the picturesque location of Corsica where a part of Tamasha was filmed. Deepika captioned the photo: "Capturing Moments.' Needless to say, within few hours of surfacing on Instagram, the photo has over 10 lakh likes. The photo has been liked by Arjun Kapoor and Jacqueline Fernandez. Designer Anita Shroff Adjania left a comment on the photo, which read: "Lovely moment, our Tamasha."

The comments section has been flooded with comments like, "This sequence was so beautiful," "The best film I have ever seen," and "Tara (Deepika's name in the film) looking amazing." Take a look at Deepika's Instagram post here.

The Imtiaz Ali-directed Tamasha released in 2015. The film opened to mix reviews but failed to do remarkable business at the box office. Tamasha was Deepika and Ranbir's third collaboration. Deepika Padukone and Ranbir Kapoor have also co-starred in films like as Bachna Ae Haseeno and Yeh Jawaani hai Deewani .

In April, Deepika and Ranbir also walked the ramp for Shabana Azmi's Walk Of Mijwan Fashion Show. Manish Malhotra had designed their outfits for the event.

On the work front, Ranbir Kapoor was recently seen in Rajkumar Hirani-directed film Sanju, which was appreciated by audience and the critics. The 35-year-old actor is currently shooting for Ayan Mukerji's Brahmastra, which is a fantasy trilogy. Deepika Padukone, was last seen in Sanjay Leela Bhansali's "Padmaavat".