In Chennai, Kangana Ranaut As Jayalalithaa Described As 'Mannequin, Mocking'

Kangana Ranaut's fans have been all praises but several have been left unimpressed, dismissing her Jayalalithaa look as inauthentic 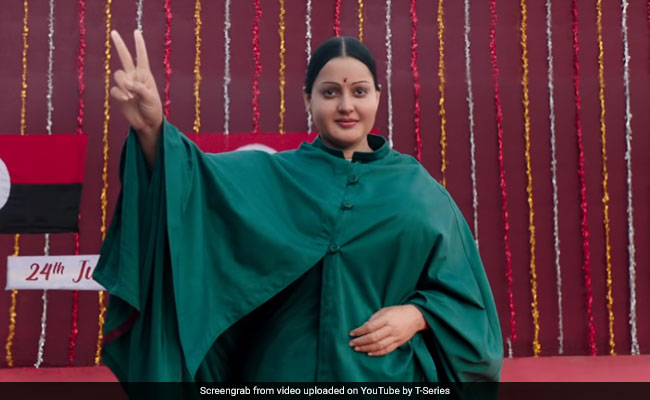 Actress Kangana Ranaut's first look as actor-politician Jayalalithaa in the teaser of upcoming biopic Thalaivi has received mixed responses. Her fans have been all praises but several have been left unimpressed, dismissing her look as inauthentic. In Chennai, there is definite disapproval - many say Kangana does not resemble Jayalalithaa at all on the poster and in the teaser; in fact, there is some worry that Thalaivi portrays Jayalalithaa, who died in 2016 at 68, in a 'mocking' manner. The first looks of Kangana Ranaut as Jayalalithaa were released over the weekend, and shows the actress in the late politician's trademark green cape and middle-parted hairdo.

Speaking to mid-day, Kangana Ranaut said she put on six kilos to look like Jayalalithaa, with hormone pills to help her gain weight. However, not everyone has been convinced by her transformation, believing it to be prosthetic-enabled. Arun Venugopal, actor and commentator, told NDTV, "For a moment, I thought it's a mannequin and not an actor performing. The fact that she has not gained weight for Ms Jayalalithaa's role would be unacceptable for people who look for minute details. They should learn from Kamal Haasan, particularly when it comes to prosthetics, and Aamir Khan's work in Dangal - he did not put a body suit but actually gained weight for the role."

Kangana Ranaut in a still from Thalaivi teaser (courtesy YouTube)

There has been concern expressed about the intent of Thalaivi. Shivani Arora, a movie buff from Chennai, says, "Kangana is in no way near her. If the story is good, showing Jayalalithaa's work, it's fine. If they are mocking her, showing her coat, it's not fine." Disappointed film buffs have also been ranting on social media.

Two other film projects have been announced in which actresses Nithya Menen and Ramya Krishnan play characters said to be inspired by Jayalalithaa. So comparisons, many say, is inevitable.

Actor and film historian Mohan Raman says, "Personally, I don't think the look should matter because if you take the Dhoni biopic, the actor playing Dhoni least looks like Dhoni. Today, we have a biopic on the world cup coming up with Kapil Dev; I dont think the hero looks like Kapil. But when it comes to famous people, I think we should have followed better casting procedures like how Richard Attenborough did by casting Ben Kingsley as Gandhi."

Already, Deepa Jayakumar, niece of the four term Tamil Nadu Chief Minister and a legal heir, has moved the Madras High Court against the film and veteran director Gautham Menon's Queen, the web series that features Ramya Krishnan. Citing privacy, she argues that biopics on Jayalalithaa need her consent for the script and storyline. However, Team Queen told NDTV, "We don't claim Queen to be a biopic of Ms Jayalalithaa. It's an inspirational story. The story is about an aspirational lady who becomes an actor and then makes a political plunge."

The ruling AIADMK won't react yet. The film, directed by A J Vijay and co-starring Arvind Swami as MGR, is slated for a June release next year. While the court will decide on whether films can even imaginatively reflect the private life of Jayalalithaa, the subject has already generated quite a buzz.