Kangana Ranaut On Transforming Into Jayalalithaa In Thalaivi: 'Had To Take Hormone Pills'

Kangana Ranaut said, "Actors usually get the apparel and appearances on point but not the physical transformation." 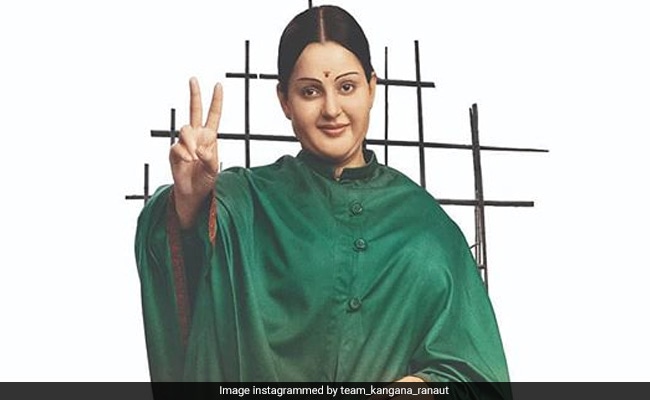 Actress Kangana Ranaut says that she had to put on six kilos for her upcoming film Thalaivi, in which she plays the role of actress-turned-politician J Jayalalithaa, for which she took "hormone pills," reports mid-day. "That was needed so as to look voluptuous, especially around the belly and thighs. Since I am tall and skinny, and my face is angular, not round, I had to take mild doses of hormone pills to look different. Of course, I also started eating foods that promote weight gain," she told mid-day. Thalaivi, which is directed by AL Vijay, brings onscreen Jayalalithaa's journey as a stellar actress which was followed by a powerful political career.

"Actors usually get the apparel and appearances on point but not the physical transformation. Vijay wanted me to resemble her as closely as possible. She (Jayalalithaa) endured a drastic physical transformation in her life," Kangana told mid-day and added, "Having grown up as a Bharatanatyam dancer, she (J Jayalalithaa) had an hour-glass figure. Then, when she joined politics, she had an accident which demanded that she be injected with huge doses of steroids. While we could not depict all of that, we did take measures (to resemble her during these phases)."

The first look of Thalaivi released over the weekend and it received mixed response on social media. A section of the Internet said that Kangana resembled Jayalalithaa to the T while some had a different opinion, which they expressed through memes.

But first, take a look at the teaser of Thalaivi:

A superstar heroine, a revolutionary hero, and now it's time to watch her story unfold! Presenting #KanganaRanaut, in & as #Thalaivi. A film by #Vijay, arriving in cinemas on 26th June, 2020. . . . . @team_kangana_ranaut @vishnuinduri @shaaileshrsingh @brindaprasad @karmamediaent @tseries.official @vibrimedia

Just saw that picture of Kangana in Jayalalitha get up. What you doin girl pic.twitter.com/FFBBIPgLRY

Thalaivi is simultaneously made in Hindi, Tamil and Telugu and it will open in cinemas on June 26.