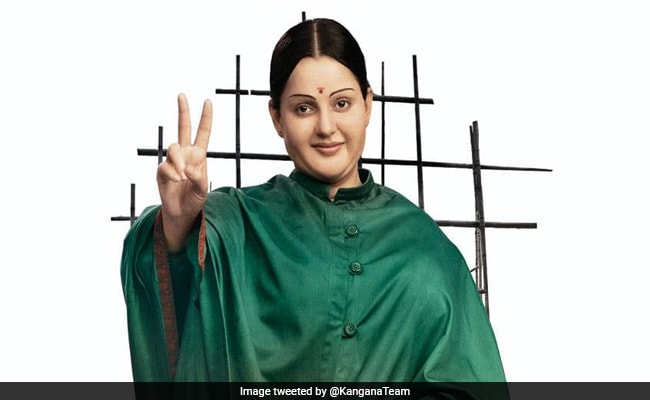 Kangana Ranaut on the poster of Thalaivi (courtesy KanganaTeam)

The first look poster of Thalaivi - the biopic of former Tamil Nadu chief minister J Jayalalithaa - released on Saturday and encountered mixed reactions on Twitter. Kangana Ranaut, who plays the role of Jayalalithaa in the biopic, indeed looks unrecognisable in the poster and while fans of the actress tweeted about anticipating yet another National Award for her, a section of Twitter was not impressed and decided to troll Kangana for "looking fake". "Kangana looking hilarious with 1 kg make-up," read a tweet while another user added: "This looks so freaking fake". Several others had just one word to describe Kangana's look as Jayalalithaa - "disaster" while many users laughed out loud on Twitter, reacting with the LOL emojis. Some on Twitter also found Kangana's look as Jayalalithaa less like Thalaiva and more like Smriti Irani and Anil Kapoor's oversized character from the film Badhai Ho Badhai.

Kangana Ranaut's team shared the first look poster of Thalaiva on Twitter with these words: "The legend we know, but the story that is yet to be told! Presenting Kangana Ranaut, in and as # Thalaivi." The poster was also accompanied by a teaser of the film.

A superstar heroine, a revolutionary hero. Watch her story unfold!
Presenting #KanganaRanaut, in & as #Thalaivi. A film by #Vijay, in cinemas on 26 June 2020 https://t.co/qzfa7RKwyj@KanganaTeam@vishinduri@ShaaileshRSingh@BrindaPrasad1@KarmaMediaent@TSeries@vibri_media

The poster was also shared by trade analyst Taran Adarsh and here's how a section of Twitter reacted:

Lmao this looks so freaking fake

She neither looks Kangana nor Jayalalitha. Looks like Smriti a lot lol

Disappointed fans of Kangana Ranaut hoped that upcoming posters of Thalaiva "will do justice". Here's what one user tweeted: "Make-up achcha nahi kia. Baaki acting will be the key. She is my favourite. So hope other posters will do justice."

Make-up achcha nahi kia. Baaki acting will be thbe key. She is my favourite so hope other posters will do justice

Is it an animated movie? No doubt about her acting skills but her makeup looks like Chachi 420!

However, there were also those who were impressed by Kangana's first look poster of Thalaivi and cheered for the actress on Twitter.

OMG is she kangana??? Toooo gud.. waiting for the movie..only and only can play this role..she is definitely from a diff world

Directed by Vijay, Thalaivi is slated to hit screens on June 26, 2020. The film also stars Roja actor Arvind Swamy. Kangana was last seen in Judgementall Hai Kya and next has the film Panga in her line-up.