"I'm An Aquaholic": Guess The Celeb Shining Like The Maldives Sun In This Pic

The actress gave herself the name after her delightful times spent at the Maldives beaches during her vacation. 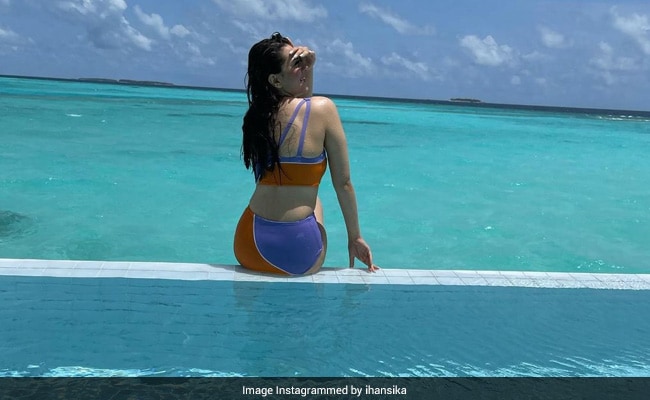 Hansika Motwani's holiday in the Maldives is no coincidence. Where else could this water baby go to? Hansika's love for the beaches is now an open secret to all. But who knew she would come out in the open as an "aquaholic"? Yes, that's what Hansika calls herself now. The actress is living in a paradise as she sits in her colourful bikini on the edge of a swimming pool overlooking the ocean. In the caption to her latest post, Hansika wrote, "Yes, I am an aquaholic." She adds an emoji of rising tides to make her point once and for all. Look at the upload:

What does Hansika Motwani's beach life look like? Well, she has apparently hung a Do Not Disturb tag before us and we do not dare to disobey her. In this video, Hansika is seen having a luxurious bubble bath in a bathtub while sipping a drink. "Living the beach life," her caption read. In the video, the audio says, "Do not disturb her peace. Do not disturb her rest. Do not disturb her success." Hansika seems determined to have no one to spoil her holidays.

The actress celebrated her 30th birthday in the Maldives a few days ago. In her video, Hansika Motwani is seen being surprised by the pink and purple themed party that her friends had organised for her. Hansika stitched several Boomerangs in her video and radiated her joy. The actress also brought her pet pooch with her to the party. Hansika was "grateful" for the celebration, as she wrote in her caption.

Hansika Motwani's fun times in the Maldives is well captured in this video where she was seen grooving to the tune Jalebi Baby with her friend. The ocean seems to have added much vigour and glow to these happy women. As they move to the tunes, they look happy and in a bouncy mood. Have a look:

Hansika Motwani has come a long way in her acting career. Some will still remember her playing the role as a child actor in the 2001 TV serial Shaka Laka Boom Boom. Later, sherose to fame through several stellar roles in Telegu and Tamil cinema.