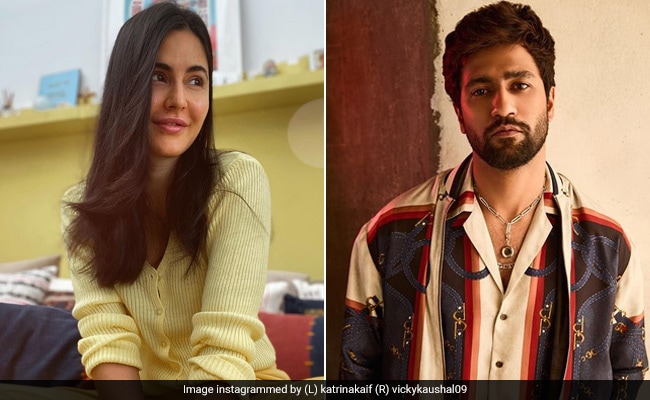 Katrina Kaif, who is rumoured to be dating Vicky Kaushal, wished him a happy birthday. Her latest Instagram story is proof. On Sunday, Katrina posted a throwback picture of Vicky on the platform in which he is sharing the frame with jawans of the Indian Army. The picture was clicked when he spent some days with them in Arunachal Pradesh for the NDTV show titled Jai Jawan in 2019. Vicky is flashing his beautiful smile in the picture. Katrina wrote, "Happiest birthday, Vicky Kaushal. May you always be smiling."

In 2019, Vicky Kaushal had shared the same picture on Twitter. He wrote, "Honoured to have spent the last few days with our Indian army posted at 16,000ft altitude at the Indo-China border of Tawang, Arunachal Pradesh..."

Honoured to have spent the last few days with our Indian army posted at 16,000ft altitude at the Indo-China border of Tawang, Arunachal Pradesh. Thank you @ndtv for giving me the opportunity to salute the real heroes of our country. Watch #JaiJawan this Independence Day on NDTV. pic.twitter.com/XpuuLIMVzY

Vicky Kaushal celebrated his 33rd birthday with his family. We got a glimpse of his low-key birthday celebration on his brother Sunny Kaushal's Instagram handle. On Sunday, Sunny had posted a picture of Vicky on the platform in which the Uri actor can be seen posing with his birthday cake. Sunny wished him saying, "Janamdin mubarak ho mere bhai (Happy birthday, my brother)."

Vicky's father Sham Kaushal also wished him on the occasion yesterday. On Sunday, Sham shared a collage of Vicky's then and now pictures on the platform. In the left picture, we see Vicky as a little child. The right picture features the actor performing at an award function. The text on the first picture read, "Mera wala gana lagao (Play my kind of music)" and the second picture's text read, "Phir dance karunga (Then, I will dance)." Sham wrote, "Happy birthday Puttar. Feel blessed to have a son like you and may God's blessing be always with you. Love and blessings."

Coming back to Katrina Kaif and Vicky Kaushal, the rumoured couple has been tight-lipped about their relationship in public. Rumours of their alleged romance had begun when they were spotted together during a Diwali party in 2019. Both Vicky and Katrina had tested positive for COVID-19 in April this year. They recovered from the virus around the same time.

In terms of work, Katrina Kaif made a special appearance in the song Kudi Nu Nachne De from Angrezi Medium last year. Katrina now has films like Sooryavanshi, Phone Bhoot and Tiger 3 coming up.

Vicky Kaushal, on the other hand, was last seen in Bhoot - Part One: The Haunted Ship in 2020. Vicky was paired opposite Bhumi Pednekar in the 2020 film. He is now gearing up for films like Sardar Udham Singh, Sam Bahadur and Mr Lele.