ICYMI, The Sui Dhaaga Challenge Kept Salman Khan, Janhvi Kapoor And Others Busy Over The Weekend 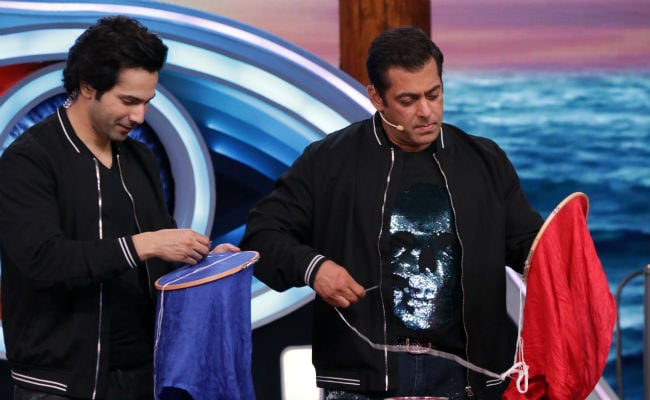 After Shah Rukh Khan nailed the Sui Dhaaga Challenge set by actors Varun Dhawan and Anushka Sharma for the promotion of their film, many celebrities may have thought that they would not be able to outperform SRK (he said so too). But over the weekend, many Bollywoodwallahs set out to complete the task in the way it was envisioned by team Sui Dhaaga (unlike Shah Rukh's hilarious way). For the uninitiated, participants of the Sui Dhaaga Challenge are required to thread a needle, in sync with the theme of the film. Salman Khan, Madhuri Dixit, Janhvi Kapoor and Anil Kapoor tried their luck with the sui and dhaaga, some of which yielded positive results.

Varun Dhawan took the promotion of Sui Dhaaga to Bigg Boss 12, which is hosted by Salman Khan. When he was interacting with the Dabangg actor on the show, Varun introduced Salman to the Sui Dhaaga Challenge, which the 52-year old actor completed like a boss. Salman Khan threaded the needle with ease even before Varun could complete explaining the task. He also embroidered the initials of his name on a piece of cloth using the embroidery hoop ring.

Is there anything @beingsalmankhan cant do. I was really surprised and so was everyone when we realised how good bhai is with #suidhaaga . The #suidhaagachallenge reaches the #bb12 house watch tomorrow

Janhvi Kapoor took Shashank's challenge on her recent trip to Italy, where she attended Isha Ambani and Anand Piramal's pre-engagement party. Janhvi's sister Khushi also joined her for the task. Janhvi was super thrilled after she completed the challenge in less than a minute. Then, she nominated her Dhadak co-star Ishaan Khatter and Loveyatri actors Aayush Sharma and Warina Hussain.

Anil Kapoor struggled with the task for a few minutes before giving up and saying, "Rajkummar Rao, your film has been a hit (Stree). Why don't you give it a try?" Co-incidentally, Rajkummar Rao plays the role of a tailor in Stree.

Thanks for nominating me @madhuridixitnene ! After this epic fail of an attempt, I nominate @rajkummar_rao to try his hand at the #SuiDhagaChallenge. All my love & luck to @varundvn @anushkasharma ! Can't wait to see u guys weave the beautiful story of #SuiDhaga!

Sui Dhaaga, Varun and Anushka's upcoming film, is set in the heart of India and it the story Mauji and Mamta, who rise against all odds to set-up a tailoring and embroidery business.