Sui Dhaaga Challenge requires the person challenged to thread a needle, in keeping with the theme of the film 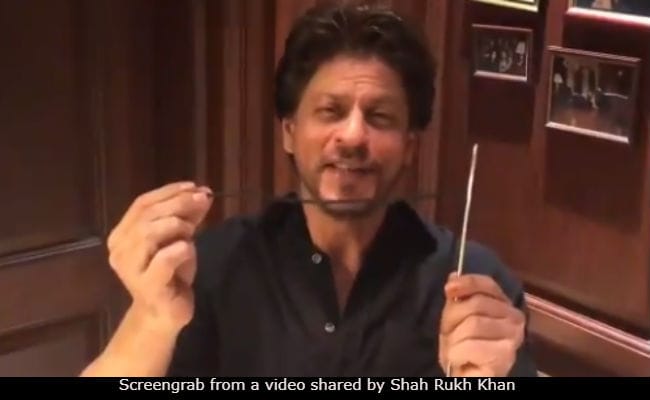 Shah Rukh Khan is late to the Sui Dhaaga Challenge party but what he lost in time, he made up in style. One of the first stars to be tagged - he was Sui Dhaaga actress Anushka Sharma's pick - Shah Rukh Khan has only now posted his video. For those who don't know, the Sui Dhaaga Challenge requires the person challenged to thread a needle, in keeping with the theme of the film. As the first person to take the challenge - Akshay Kumar, tagged by Sui Dhaaga actor Varun Dhawan - discovered, it's a lot harder than it looks. But not if you are SRK, because "bade bade logon ki badi badi cheezen." Watch the video to find out what that means - all we're telling is that SRK completed the challenge in "0.000001 milliseconds" and that he has in turn tagged anyone who thinks they can better his time.

You win, Shah Rukh Khan. Alia Bhatt, Ranbir Kapoor and the others who have taken the challenge, and struggled, so far must be lost in admiration just as we are. SRK's Raees co-star Mahira Khan left a comment on his post saying, 'Gangsta Khan.' Abhishek Bachchan and Varun Dhawan have liked it.

It's not the first time Shah Rukh Khan has helped Anushka Sharma, whose first hero he was in her debut film Rab Ne Bana Di Jodi, promote her projects. He made a video for her #ShashiWasHere campaign for 2017 film Phillauri which Anushka both starred in and produced. SRK and Anushka also co-starred in the films Jab Tak Hai Jaan and Jab Harry Met Sejal, and will be seen together in this year's Zero.

Meantime, the Sui Dhaaga Challenge bar has been set very high for Deepika Padukone and Ranveer Singh, who were tagged yesterday by Ranbir Kapoor and Karan Johar.

Sui Dhaaga, in which Anushka and Varun play a young married couple struggling to set up their own garments business, releases at the end of this month.