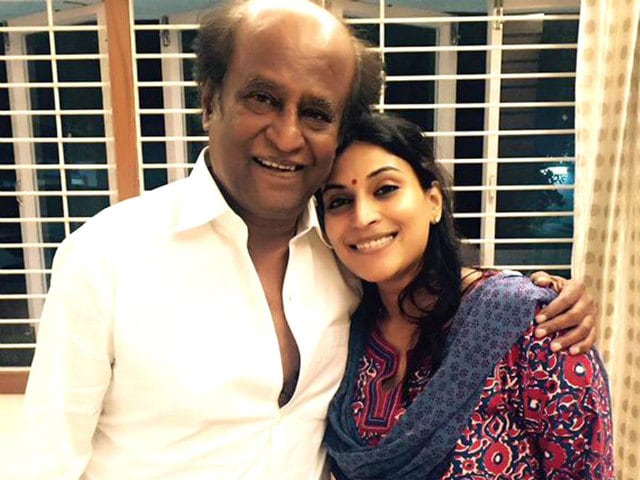 New Delhi: The thing that strikes you most about Aishwaryaa Rajinikanth Dhanush is how down to earth and grounded she is. The daughter of megastar Rajinikanth and the wife of superstar Dhanush, Aishwaryaa R Dhanush is not one to rest on the laurels of either her father or husband's stardom but instead has carved her own niche. Aishwaryaa, 34, is a director, dancer and singer and has just released her memoir, titled Standing On An Apple Box. The reason she wrote the book - her account of growing up as the daughter of Rajinikanth - is because she wanted to dismantle myth and misconceptions surrounding star children.

"We are called snobbish but we aren't. We just like keeping to ourselves. Look at me, I am a film producer but many would look at me say 'c'mon, you have your father and husband, why do you need us?' We are constantly under scrutiny," Aishwaryaa told NDTV.

Giving full credit to her parents, especially her mother Latha Rajinikanth, Aishwarya said both her sister Soundarya and she were kept away from the "stardom of their father," which is of epic proportions. "My parents wanted us to have normalcy and now I realise how important that is because I am a mother of two myself and try to do the same," Aishwaryaa said.

Growing up in the public gaze now is twice as hard, she admitted, what with cameras and flashbulbs everywhere. However, there is an upside of mobile phones and GPS tracking - "I can keep a watch on my children," she said.

Aishwaryaa R Dhanush had a sheltered upbringing - her father was her date to the disco when she turned 18. "It was December 31 and my birthday falls on January 1 and I wanted to see a disco, and Appa said 'fine, I will take you.' It was New Year's Eve. We went in and he says 'now you have seen what it looks like, let's leave.' He had anticipated rightly, a crowd broke out seeing him in their midst but he also wanted to keep my heart and not deny me what I wanted," Aishwaryaa said.

About her book and its unusual title, the girl who grew up among stars admitted that the apple box has special relevance. Often used while filming to station cameras and equipment, Aishwaryaa said the apple box was what she perched herself on in film studios to watch shoots.

Rajinikanth takes his stardom seriously, she said. "You will never see him joke about it or mock it or do something that will reflect badly. He takes it very seriously. He is someone who regards every film as his first. You never know what will work with the audience and what will not. The beauty of cinema is it's unpredictability," Aishwaryaa R Dhanush said. Rajinikanth starred in this year's blockbuster Kabali and will next be seen in 2.0, sequel to his 2010 hit Enthiran.

So what was the transition like from daughter of a superstar to the wife of one? "It was a beautiful transition and I was ready to handle what came with the territory," said Aishwaryaa, who directed her husband Dhanush in 2012 film 3.

Promoted
Listen to the latest songs, only on JioSaavn.com
But there are no plans, as of now, to direct her dad. "Am happy being the producer of my father's films. We share a beautiful relationship, don't want to be his director," Aishwaryaa said.

So have her father and husband read the book? "Yes, my father knew I had a flair and my husband was rather surprised," she said, laughing.