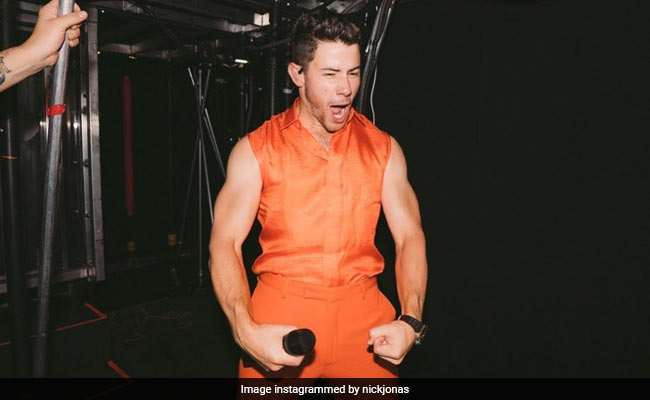 Nick Jonas is just too cute and you will probably have the same school of thought after checking out his latest Instagram entry. The 27-year-old singer, on Friday morning, posted a picture of himself in which he can be seen doing his "best impression" of Hollywood actor and former wrestler Dwayne Johnson (popularly known by his ring name The Rock). In the photograph, Nick, dressed in an orange outfit, can be seen posing with a mic like a dumbbell and the expression on his face is intense. Just like us, Priyanka Chopra too loved Nick's impression of Dwayne and she left a kiss and a heart emoji in the comments section. Nick captioned the post: "Doing my best impression of Dwayne Johnson under stage. Can't wait for Salt Lake city tonight."

Check out Nick Jonas's post here, which garnered over 3 lakh likes within a few hours:

Priyanka Chopra and Dwayne Johnson have co-starred in the 2017 beach side drama Baywatch, in which she played the antagonist Victoria Leeds. The film also starred Zac Efron.

Nick Jonas and Priyanka Chopra always manage to set couple goals and frequently feature on each other's Instagram profiles. Here are some of the posts that the couple shared recently:

Priyanka Chopra and Nick Jonas got married in Umaid Bhawan Palace in December last year, where they had Hindu and Christian wedding ceremonies. On the work front, Nick Jonas will be seen playing the role of World War II gunner Bruno P Gaido in Midway. He will also be seen in Jumanji: The Next Level.

Priyanka Chopra awaits the release of The Sky Is Pink, co-starring Farhan Akhtar and Zaira Wasim. She also has We Can Be Heroes and Netflix's adaptation of Aravind Adiga's Man Booker Prize-winning novel The White Tiger.