"Hope you move today in whatever way you can and thank your body for putting up with so much patiently," wrote Masaba 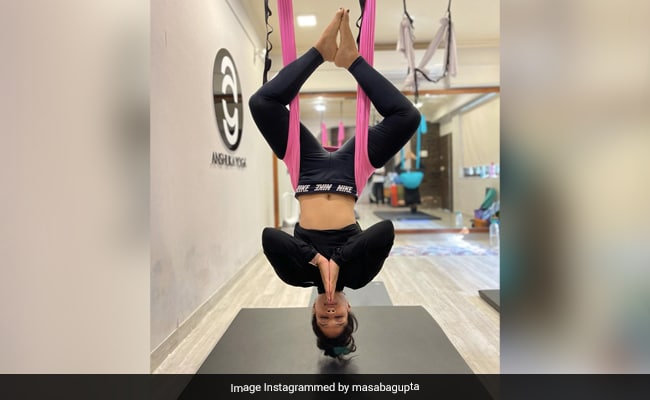 Masaba Gupta, in her latest post on Instagram, shared that the last few days weren't quite easy for her but with the help of yoga, she got "back to her routine." The celebrated fashion designer posted two pictures of herself performing aerial yoga and wrote: "The last few days have been filled with rage and disappointment at how my health has been. A freak antibiotic allergy, skin that's still peeling and stinging but I had to get back to routine. Back to yoga class this morning with a 108 Surya Namaskars and a peaceful inversion (that was slightly tilted) and I feel like myself again."

"Hope you move today in whatever way you can and thank your body for putting up with so much patiently," she added.

Masaba Gupta started doing aerial yoga last December. Sharing how happy she was after her first class, the designer wrote this in an Instagram post: "My first ever Aerial Yoga class with Anshuka and it made me so happy. Did a far from perfect Inverted Natarajasan aka Dancers Pose! I've discovered, discarded and re-jigged so much of my fitness regime this lockdown but Yoga always finds its way back into my life and I swear by it. Especially after my back injury in October - the key is to just keep moving! And to not be 'Nazuk'! This year - I started to think of my body as a tank that can ride through anything and hopefully the mind will follow."

She made her acting debut with Netflix series Masaba Masaba, a show loosely based on her life, last year.